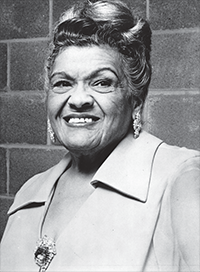 Zelma Watson George became a symbol of African American achievement in several fields ranging from operatic diva to United Nations diplomat. After moving to Chicago with her family she earned a sociology degree from the Univ. of Chicago and studied voice at the American Conservatory of Music. Later she added advanced degrees in personnel administration and sociology from New York University.

Her journey would bring her to Cleveland to examine the John G. White Collection of the Cleveland Public Library. She would go on to write a musical drama based upon her research, “Chariot’s A’Comin!”, which was telecast by WEWS-TV in 1949. That year Zelma assumed the title role in Gian-Carlo Menotti’s opera, The Medium, at Karamu Theater. She was selected by Menotti himself to repeat her triumph in an off-Broadway revival of the work. As an African American appearing in a role not written for one per se she was likely New York’s first example of non-traditional casting.

In the 1950s Zelma served on several government committees at the national level, culminating in a world lecture tour as good-will ambassador and an appointment as U.S. alternate delegate to the United Nations General Assembly (1960-61). From 1966-74 she served as director of the Cleveland Job Corps. Following her retirement and the death of her husband, she lectured, wrote, and taught at Cuyahoga Community College.