On Lake Shore Boulevard just east of East 156th Street in Cleveland’s Collinwood neighborhood, Euclid Beach Park’s grand entrance still stands as a silent reminder of what was arguably the area’s most beloved amusement park.  The rides along with the aroma of popping popcorn are long gone, but for those who visited the Park, the memories flood back at the sight of the stately entrance arch.  From opening day on June 22, 1895 to the Park’s last day on September 28, 1969, there was always an entrance arch to welcome visitors whose appearance changed and evolved over the years.  When the Park first opened, the property was obscured from public view with high walls and free access was blocked with an imposing metal gate.  In the early days, drinking, gambling, freak shows, and games of chance were the mainstays along with an admission charge.  When the Humphrey family took over operation of the Park in 1901, patrons were no longer charged to enter and they could spend as little or as much as they wished to enjoy the family friendly fun.   A much more modest arch made of wood located a quarter mile east of where the current arch stands greeted visitors. 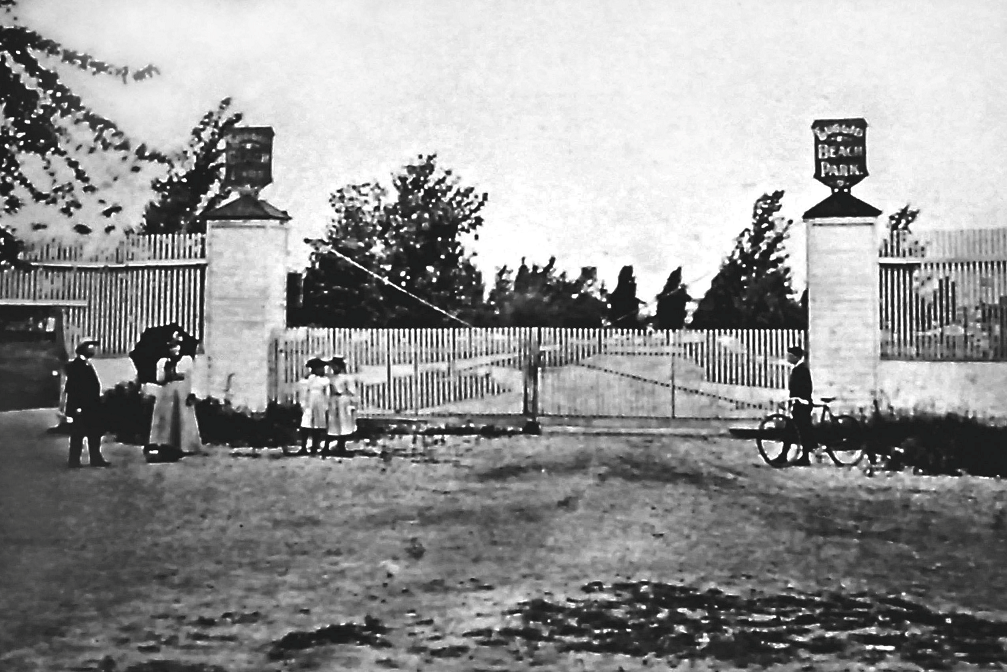 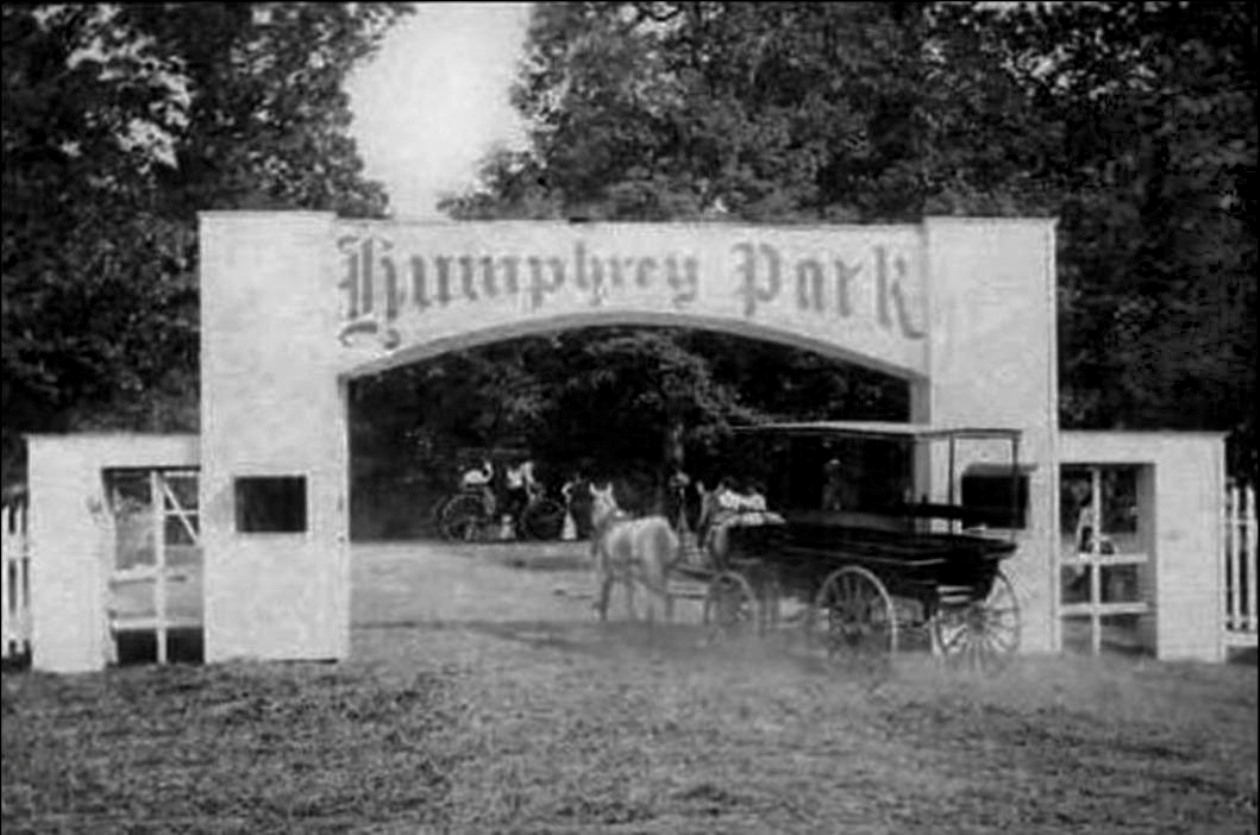 The current main entrance gate arch was constructed in 1921.  It was constructed entirely of wood and designed to resemble a large letter “H” (as in Humphrey). The sign in the crosspiece originally said “Park”. As the public began referring to the popular amusement park as “Euclid Beach Park’ rather than “Humphrey Park”, the sign in the centerpiece was changed to the familiar Euclid Beach Park.

The foundations of the Arch are octagonal in shape.   Each side is approximately 36” long and the distance between the parallel sides is 96”.  Both towers have an entrance door on their back side.  There are permanent wooden ladders along one wall in each tower that allow access to the interior of the centerpiece that joins the towers.  Originally incandescent bulbs were used to illuminate the letters spelling out “Euclid Beach Park” in the centerpiece.  A bit later the letters were converted to neon.  Around 1942, the Arch went through a final transformation with the addition of a covering called “Permastone” over the wooden exterior giving it a cut stone appearance.  When the Park closed and the property was sold for development, the Arch remained as a silent reminder of what once was located there.  As a testament to the significance of Euclid Beach, the Arch was designated as a Cleveland landmark by the Cleveland Landmark’s Commission. 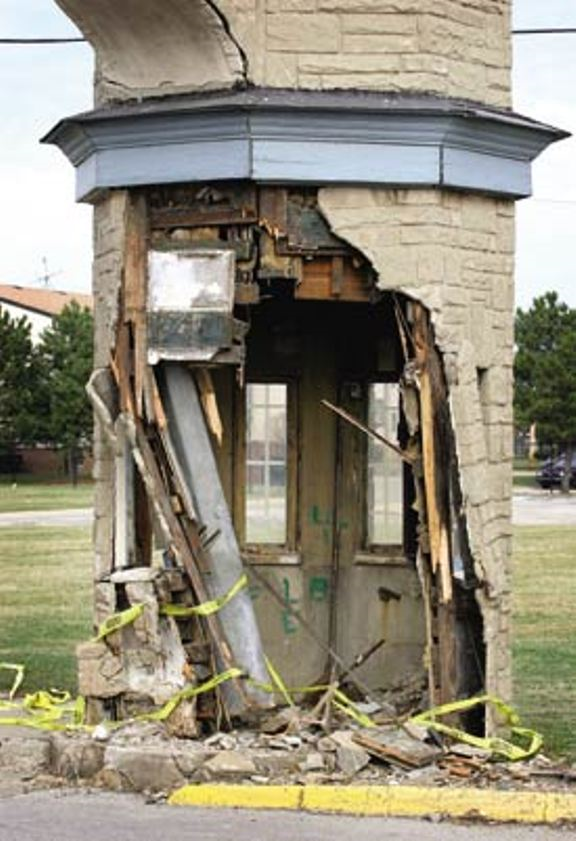 On January 11, 2007, an SUV crashed into the east tower of The Arch. The impact tore out about a third of the first story walls of the east tower and caused the tower to shift partially off its foundation, about six inches toward the main street in front of The Arch. There was damage at the crosspiece where it connected to the east tower. Force of the impact was transferred through the centerpiece and to the west tower causing it to rotate slightly on its base. The City of Cleveland Building Department and Landmarks Commission responded immediately that day.  A company specializing in structural damage temporarily installed scaffolding bracing under the crosspiece to prevent a collapse while the structure was assessed.  There was concern that entire structure had been compromised to the point that demolition would be necessary.  Fortunately, repairs were able to be completed and the restored Arch was rededicated on Tuesday June 12, 2007 and still stands today. 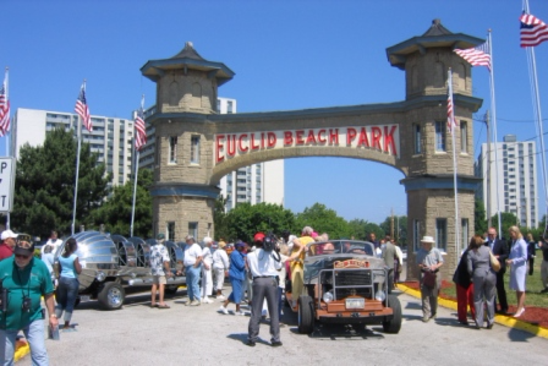