What is recognized as America’s first roller coaster type ride is the Gravity Railway located in Mauch Chunk, Pennsylvania.  In the 1950’s, the town’s name was officially changed to Jim Thorpe after the famous Olympic athlete. Then In 1827, the Mauch Chunk and Summit Railroad was constructed to carry coal out of the mountain mines located there down a nine mile stretch of rugged mountain area.  The rail line was not only carried coal down the mountainside, but also miners returning to their homes.  A more efficient rail line was built in 1872 and the line was purchased by the Central Railroad of New Jersey (CNJ) in 1874.  Seeing the commercial value of offering rides to the general public, Theodore and H.L. Mumford leased the line from the CNJ and operated the railway as a tourist attraction until the Great Depression forced their closure in 1932.  America’s first roller coaster “thrill” ride began taking on passengers in 1874 and was an immediate success.  A young talented inventor rode the ride and his life path changed. That young man’s name was LaMarcus Adna Thompson. He was born in Licking County, Ohio on March 1, 1848 and is often referred to 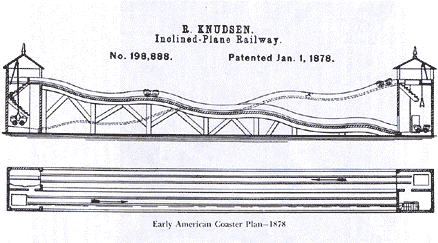 as “the Father of the Modern American Roller Coaster”. Throughout his lifetime, he held over thirty patents relating to roller coaster technology. The original Switchback Railway built at Coney Island in 1884 was designed by Thompson working off of another inventor’s patent that was filed in 1878. Richard Knudson called his version of a gravity roller coaster the “Inclined Plane Railway” and it is strikingly similar to Thompson’s final design. The Switchback Railway that debuted at Coney Island on June 16, 1884 holds the distinction of being the first roller coaster type ride designed and built for the purpose of amusement rather than an existing rail line converted for that purpose. The ride consisted of two sets of parallel tracks descending in opposite directions from elevated towers. To complete their round trip riders had to get out of their cars after they came to a stop and ascend a second fifty foot tower to board cars to head back. The novelty of the new ride far surpassed any problems riders had with exiting their cars, re-boarding, or climbing the second set of stairs to the top of the tower to return.  Initially riders were not seated directly in front of one another as they are on modern roller coasters, but were seated in benches parallel with the track facing outward.  Even with all of its shortcomings, the ride was immensely popular and reportedly paid for itself during its first month of operation.

The original cost for the heart pounding six mile per hour ride that lasted one minute was five cents.  Thompson’s later rides were often referred to as Scenic Railways since they gave riders a panoramic view of the landscape as they traversed the tracks from one end to the other. His later designs had elaborate backgrounds of exotic foreign locales painted along the length of the tracks. The immense popularity of the new ride led to the formation of the L. A. Thompson Scenic Railway Company that oversaw the construction of rides across the country. It should come as no surprise that when rides were first added to Euclid Beach in 1896 a LaMarcus Thompson Gravity Roller Coaster was built. The Switchback Railway at Euclid Beach had a little over one thousand feet of track. Riders climbed stairs to the top of the tower where they boarded a car that was manually pushed out of the loading platform and hopefully gravity took the passengers to the opposite end of the tracks where the other tower was located. There they would disembark and the ride operators would push the car up to the loading platform in that tower. Once they were again seated, they would be pushed out onto the track for the return trip to the first tower…a truly exhausting amount of labor for a six mile per hour trip. The ride was dismantled and removed from the Park when the Figure Eight was installed in 1904.

The big question…can you still ride a Switchback Railway today? The answer is sort of…a modern version of the ride with a lift hill opened at a small amusement park located between San Antonio and Austin Texas in the small town of Seguin in 2015.

The Famous Switchback Railway was designed by the Ohio based Gravity Group for ZDT’s Amusement Park and is the first new wooden “shuttle coaster” built anywhere in the world in more than a century. Like the old Switchback at Euclid Beach it reverses course mid-way. Unlike the ride at the Beach it retraces its way back to the loading station backwards rather than forward. The “new” Switchback begins with a sixty three foot tall lift hill rather than a friendly push by Park employees, reaches speeds up to forty five miles per hour, and ascends a sixty four foot tower before rocketing back to the station along 1,980 feet of track (actually only about 1,000 feet of track but you travel it twice). A brake run at the bottom of the lift hill along with a section of switch track allows the coaster to safely operate two trains.