In the year 2000, the Crawford Museum was contacted by the Signature Models firm to make toy scale models of some of the collection’s most popular cars. One of those chosen was the 1920 White truck.  (WRHS accession 2003.23.4).

Cleveland-based, White Motors got its start thanks to sewing machines. Thomas White, founder of the White Sewing Machine Company, relocated to Cleveland to be closer to the Midwest markets.  His sons, Walter, Windsor, and Rollin became fascinated by innovations with the automobile instead.  Rollin White, educated and trained as an engineer, designed an early steam-powered automobile, and the White brothers were able to convince their father to build it.  Its success spurred Thomas to allow the brothers to take over a corner of the White factory, and begin production.  White cars were known for their quality engineering and became the most popular steam-powered vehicles in America.  The White brothers also introduced a line of trucks, at first steam-powered and later gasoline-powered.  By 1915, the automobile department at the White Sewing Machine Company was spun off into its own company, the White Motor Company.

White trucks soon gained a reputation for toughness and durability, and very quickly White trucks were adopted by the U.S. Army, as well as a variety of commercial businesses.  During WWI, the White 2-ton truck was selected as the standard Class A truck of the U.S. Army, and Whites saw extensive service in Europe. White trucks were doing so well that by 1918, White Motor dropped all automobile production and shifted solely to truck production, which continued until 1980.

Among the commercial users of White trucks was the Dan-Dee Potato Chip Company, which began in 1913, and moved to Cleveland in 1915.  Starting with horse-drawn wagons, the company soon moved to gasoline-powered vehicles.  This 1920 White 3/4-ton panel truck was acquired in 1952, when Dan-Dee employee Truman J. Fisher conceived of the idea of acquiring and restoring an early White to honor Dan-Dee’s founders, Charles V. Pike and Harry Orr.  Fisher supervised the restoration and realized his dream in 1953. The truck displays the 1928 Dan Dee logo and blends images of the company’s products from the late teens to the 1930s.

In addition to promoting the Dan Dee brand for forty years, the truck served the community appearing in countless parades and visiting schools, nursing homes, and hospitals, usually driven by Charles P. Pike, son of the company founder.  The truck was donated to the Crawford by Charles P. Pike in 1994. 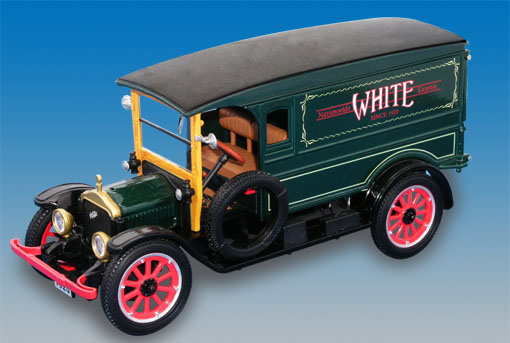