Wow Factor: 150 Years of Collecting Bold Clothes showcases fifteen decades of fashionable, inspiring Clevelanders and their style. “Wow Factor” is the ability to inspire feelings of wonder and awe. In fashion, these emotions are triggered by beauty, craftsmanship, rarity, and humor. The exhibition highlights the Western Reserve Historical Society’s outstanding collection of show-stopping clothing and accessories made by Cleveland designers as well as international designers such as Christian Dior and Carolina Herrera.

It takes bold people to pull off these looks. Wow Factor tells the stories of Clevelanders who are immigrants, scholars, artists, athletes, philanthropists, and CEOs. They are Jewish, Jordanian, Japanese, African American, and transgender. From Ada Watterson Yerkes, who broke conventions to pursue a PhD in botany before 1900, to basketball legend LeBron James, they are inspiring and relatable. We are proud to share the stories of Cleveland’s statement-makers.

The exhibition fills three galleries in the Chisholm Halle Costume Wing at the Cleveland History Center. It includes over 100 garments, accessories, pieces of jewelry, and works of art worn by Cleveland’s men and women. The objects represent the quality and history of the costume and textile collection, which encompasses over 40,000 objects—some never before on view.

About The Chisholm Halle Costume Wing

The WRHS costume and textile collection began during the 1930s after gifts from several of Cleveland’s prominent families. In 1969, we completed the first official storage facility for textiles onsite with the assistance of Chisholm Halle, Halle Brothers Company, and the Fashion Group of Cleveland, Inc.

A decade later, a permanent costume gallery opened thanks to a benefit dubbed “a party to go down in history.” Attendees wore vintage and designer clothing, which they donated on the spot and traded their ensembles for disposable coveralls at the end of the night.

In 1986, the current gallery, Chisholm Halle Costume Wing, was dedicated with the Geranium Ball. Chisholm Halle became the third generation President of Halle Brothers Company in 1966 until Marshall Field & Co. purchased the store in 1970. Along with his wife, Cynthia White Halle, he opened the luxury boutique, Chisholm Halle Inc., in 1975. After his 1982 death, Cindy continued to run their shop and raised funds to establish his legacy at the WRHS. 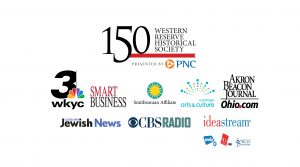