Northeast Ohio has played a vital part in the development of aviation, with one of the largest and busiest airports in the world throughout the 1920s and 1930s, and the legendary National Air Races held for 20 innovative years on the shores of Lake Erie. These contributions to aviation are showcased in the Crawford Auto Aviation Collection. The Crawford holds a dozen historically significant aircraft and numerous aeronautical artifacts, which preserve inspiring evidence of mankind’s universal dream of flight. These icons tell the evolving story of flight in the unique setting of the Western Reserve. Please enjoy the brief online exposition of our collection. 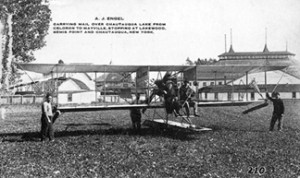 1910 Curtiss Model E “Bumble Bee”
After an accident involving a cow wrecked his first plane, Clevelander Al Engel ordered this Curtiss Hydroaeroplane so he could land on water. He named this plane Bumble Bee. Later, he modified it with wing extensions and a more powerful engine so a friend or paying customer could come along for a flight over Lake Erie. Al flew the Bumble Bee extensively throughout Northeastern Ohio, and for a time, based the Bumble Bee at the Lakewood Yacht Club (now Cuyahoga Yacht Club) at the mouth of the Rocky River. During the summer months of 1914, Al used the Bumble Bee to deliver “aerial mail,” consisting primarily of post cards, at Lake Chautauqua, New York. Al retired the Bumble Bee at the end of the 1914 season, stored the plane in his garage in Cleveland, and in 1946 sold it to the Thompson Products Auto Album and Aviation Museum in Cleveland. The Bumble Bee was restored at that time, and is now the sole remaining genuine Curtiss “hydro” in America 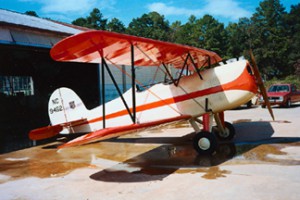 1929 Great Lakes 2T-1A Sport Trainer
The Great Lakes Aircraft Corporation was located at 16800 St. Clair Avenue in Cleveland, Ohio, in the former Glenn L. Martin factory. Operating between 1929 and 1935, Great Lakes was primarily a manufacturer of military aircraft, including Navy torpedo planes. However, from 1929 to 1933 the firm designed and produced a biplane for civilian use. These 2T-1A Sport Trainers became popular because they were easy to maneuver and fun to fly. Great Lakes ads claimed the plane could take off in 50 yards and land in just 100. The Crawford Auto Aviation Collection’s Great Lakes Trainer was the 8th one produced by the original company. 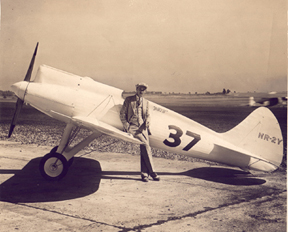 1930 Howard DGA-3 “Pete”
In 1929, Benjamin “Benny” Howard built Pete, one of the first purpose-built air race planes. Howard created the plane specifically for air racing and especially for the events at the National Air Races. Scarcely seventeen feet long with a 20 foot wingspan, Howard’s third plane, Pete, was designated DGA-3, with DGA standing for “Damned Good Airplane.” Pete’s first test was at the 1930 National Air Races in Chicago. Winning five of the first seven races, Pete became one of the most successful racers in any form of motorsport. In the men’s “Free for All”, contested by seven planes with larger, more powerful engines, Pete finished an impressive third place, despite a huge horsepower disadvantage. Howard entered the little plane in the 1931 Cleveland race, but obsolescence was already setting in; Pete could only eke out a sixth place finish. After a long life of numerous alterations and competitions Pete was finally acquired by an aircraft restorer in California who remembered the “original” Pete, and restored the plane back to its original appearance and function. 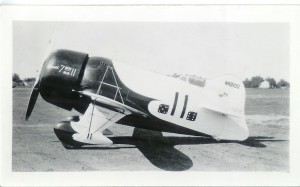 1932 Gee Bee R-1 replica
The Gee Bee R-1 is probably the most recognized of all 1930’s race planes. The stubby little airplane was the epitome of the classic Granville Brothers designs. Built in 1932, the R-1 was very fast and powerful, but it was also very challenging to fly. The pilot originally chosen to fly the R-1 was unable to participate because of injuries suffered in a crash, so pilot Jimmy Doolittle took over. Doolittle raced the Shell Speed Dash with a speed of 296.29 mph and easily won the event. In the Thompson Trophy Race, Doolittle lapped his competition, winning the Thompson Trophy. The Crawford Museum’s R-1, is a reproduction of the airplane flown by Jimmy Doolittle at the 1932 National Air and is currently being re-skinned for future display. 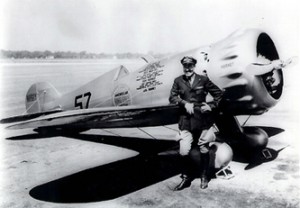 1932 Wedell-Williams Model 44
The Wedell-Williams Racer displayed is the most-remembered of the three Model 44s designed and built by Jimmy Wedell. Construction of this aircraft began in early 1932 when the flamboyant aviator, Colonel Roscoe Turner (with the financial backing of Gilmore Oil Company), contracted Wedell to duplicate the Wedell-Williams #44, “Miss Paterson.” Turner, famous for his in-flight antics with his pet lion cub, was convinced that the sleek Model 44 would make it possible for him to win the Thompson and Bendix Trophies. Completed in August 1932, Turner flew the new racer (powered by a Pratt & Whitney 550 hp Wasp Jr. engine) to third place in both the Thompson and Bendix Races that year 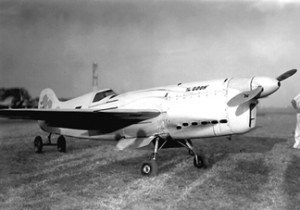 1937 Chester Special NX 93-Y “The Goon”
Built by Art Chester in 1938, The Goon, (Chester named his planes after characters in the Popeye comic strip) was the second plane built by Chester to compete in the National Air Races. His first plane, The Jeep, was a successful racer, but by 1937 it did not have the speed to compete. The Goon was a small streamlined racer that was built tightly around its small but powerful engine. At the 1938 National Air Races, The Goon, piloted by Art Chester finished a close second in the Greve Trophy Race, but he was forced to drop out of that year’s Thompson Trophy Race because of mechanical problems. Pleased with the performance of The Goon, Chester brought it to the 1939 National Air Races where he won the Greve Trophy setting a new record for the race at an average speed of 263.39 miles per hour. The aircraft was used after the 1939 Air Races in a 20th Century film entitled “Tailspin.” A red ring was added around the number 5 on the plane for the film. Bought and sold by several different owners and modified over the years, The Goon was finally purchased by the Crawford Collection in 1991 and returned to Cleveland. 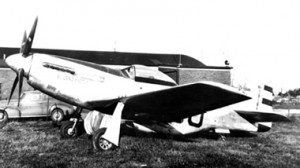 1944 North American P-51K-10NT Mustang “Second Fiddle”
Designed to provide fighter escort for Allied bombers, many Mustangs were warhorses turned thoroughbred for the post-war Thompson Trophy races. The plane was named Second Fiddle because the owner crashed his first, race altered, Mustang that he had wanted to enter in the 1946 Thompson Race. Although Second Fiddle was not as radically modified as the other plane, a special “witches’ brew” fuel helped it to finish fifth. The plane is still all-original, except for the components removed by the pilot to make the plane lighter for the race.