Doors open at 5:00pm, with the storytelling beginning promptly at 6:30pm

My Life In Comedy: From Cleveland to Hollywood – Comedian, author, wedding host, DJ – Lou Santini has done it all. In this Cleveland Storyteller session, Santini shares how his journey in comedy began, brought him to L.A., and where it’s taking him.

Stick around for Lou’s standup performance after the Dinner Party for just $10. More info here. 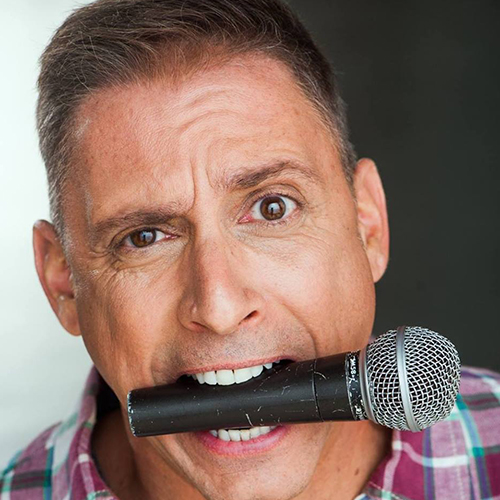 The first show comedian Lou Santini ever paid to see with his own money was Bob Sagat at the Akron/Canton Comedy Club. The then-18-year-old Northeast Ohio native was already into comedy, but he enjoyed Sagat’s set so much, he ended up paying to see him again the next night. Years later, Santini’s connection to Sagat came full circle when the former WMMS and Rock 107 DJ won the 2011 Detroit Comedy Festival and was able to open for Sagat.

Santini got his start in radio at the University of Akron, learning under the tutelage of legendary radio personalities Tom Beck and John Gorman. He was on the airwaves of WMMS in Cleveland from 1994 to ’97 before relocating to Los Angeles to pursue a career in standup and acting. The latter part of his profession has kept him plenty busy as Santini has done numerous voiceover spots, emceed thousands of corporate and private events, appeared on the TBS show “Frank TV,” the Oprah Winfrey Network, the TV Guide Network and Reelz Channel, among other projects. He’s penned two books, How to Go from Wedding Hell to Wedding Bells and 101 Weird Conversations with Mom, and is currently the “Sorta Movie Trailer Guy” for Esurance radio and movie theater spots.