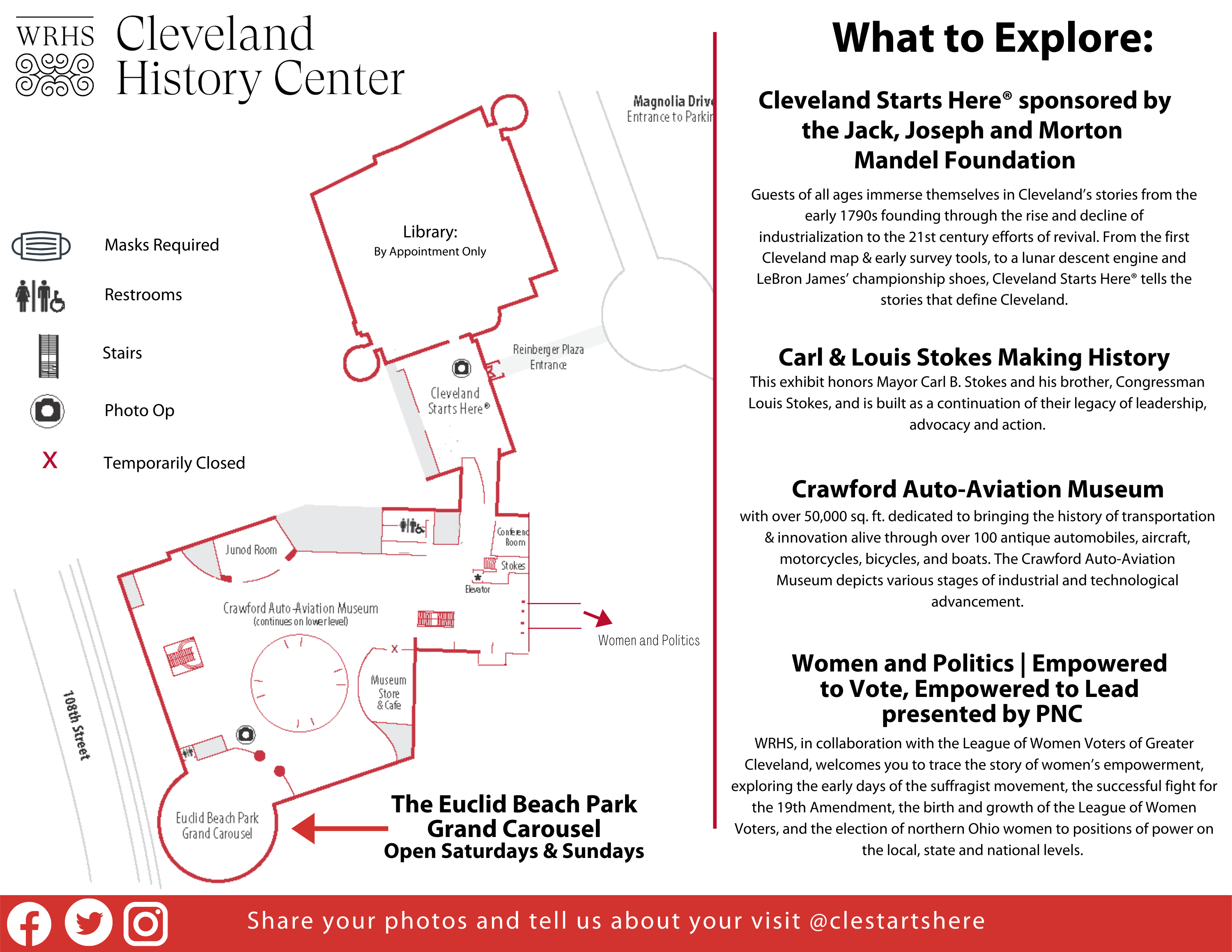 Through the use of its vast, diverse collections in the areas of family and community  history, entrepreneurship, and innovation, guests to the Cleveland History Center discover Cleveland and northeast Ohio as never before!  Your visit to the Cleveland History Center begins in Cleveland Starts Here®, sponsored by the Jack, Joseph and Morton Mandel Foundation, an exhibit that immerses guests of all ages in Cleveland’s stories from the early 1790s founding through the rise and decline of industrialization to the 21st century efforts of revival. From the first Cleveland map and early survey tools, to a lunar descent engine and LeBron James’ championship shoes, Cleveland Starts Here® tells the stories of the triumphs and tragedies that define Cleveland.

Then, explore the life and legacies of Carl & Louis Stokes: Making History. This exhibit honors Mayor Carl B. Stokes and his brother, Congressman Louis Stokes, and is built as a continuation of their legacy of leadership, advocacy and action. The stories of the political careers of Carl & Louis Stokes illuminate and define broader issues in African-American and American urban history. While the exhibit celebrates the achievements of Carl and Louis Stokes, it also uses their experiences to reflect on and explore topics such as the Civil Rights Movement, social and economic disparity and the rise and importance of heroes and exemplars.

Next, guests enter the expansive Crawford Auto-Aviation Museum with over 50,000 square feet of gallery space dedicated to bringing the history of transportation and innovation alive through over 100 antique automobiles, aircraft, motorcycles, bicycles, and boats. The Crawford Auto-Aviation Museum depicts various stages of industrial and technological advancement, both on a national and regional level. Its automobiles and artifacts are the centerpieces of three major exhibitions:

Finally, make your way to the Cleveland History Center’s NEWEST exhibit, Women and Politics | Empowered to Vote, Empowered to Lead presented by PNC. WRHS, in collaboration with the League of Women Voters of Greater Cleveland, welcomes you to trace the story of women’s empowerment, exploring the early days of the suffragist movement, the successful fight for the 19th Amendment, the birth and growth of the League of Women Voters as a force for clean government and the election of northern Ohio women to positions of power on the local, state and national levels. Women and Politics allows guests to explore the experiences and significant contributions of women of all races and backgrounds​ in the long and complicated struggle for voting rights!