“Even though times have changed, I still believe in giving God your best with your dress.”  –Zephrine Burks

Mrs. Zephrine Burks can point with pride to her many accomplishments as a musician, educator, wife, mother, grandmother, great grandmother, and former First Lady of her church. At the age of 90, Burks is especially proud of the fact that faith, family, and fashion consciousness continue to play important roles in her daily life, even in the era of COVID-19 and social distancing.

Born in Cleveland in 1930 to Sadie Mae and William Buchannan, Zephrine was named after her mother’s music teacher in Tuskegee, Alabama, her parents’ birthplace.  Like her mother and namesake, she also loved music.  In describing her introduction to the formal study of music, she stated:

Rev. Thomas Lee, the Pastor of Pilgrim Missionary Baptist Church, announced that any parent who wanted their children to take piano lessons could bring them down to the church, where a professional music teacher would offer lessons, and the church would pay for the lessons.  Fifteen students started, and two students completed the course of study. I was one of the students who finished the program.

Her piano lessons began in 1937, when she was seven years old.  At the age of nine, she began to play for the Sunday School at Pilgrim Missionary Baptist Church, and she still has fond memories of growing up in the church:

I was the only child, and my mother saw to it that I was always well dressed.  When we were getting ready for church, my mother would say, “Always give God your best,” and she would dress me accordingly.  I continued in that same manner with my children and grandchildren.

According to Zephrine, she never wanted a preacher for a husband.  As she put it,

When Rev. William Burks announced that his son Samuel Burks had accepted the call to ministry, the church clapped, and I cried. I went home and told my mother, and she said, “Listen to me, if the Lord called him, you pray and ask the Lord to make you the minister’s wife that He would have you to be.  Encourage him [your husband], and the Lord will bless both of you.” It was my mother who encouraged me, and I followed her advice.

After becoming a member of the local Minsters’ Wives Club, the women who inspired her most were Clara Banks and Anna Chatman, First Lady of the Original Harvest Baptist Church, who was fond of saying, “Zephrine you can do it!”  At the Olive Grove Missionary Baptist Church, First Lady Zephrine Burks also became the Minister of Music and a Sunday School teacher. Pastor and First Lady Burks would raise six children while working as servant-leaders in the church, and all of the children studied music.

As a 19-year-old, Zephrine Burks had joined the Cleveland Baptist Pastors’ Wives Club, and she served as the secretary for that organization when Sadie Allen was the president.  Under the presidency of Anna Chatman, the name of the group was changed to Cleveland Baptist Ministers and Pastors’ Wives. Today, Burks serves as the chapter vice president.  Burks also served as president of the Calvary Hill Baptist District Association Women’s Auxiliary for over 20 years. In describing her various leadership roles, she said,

Whatever I did in the church, at the District level and with Ministers’ Wives, I did it all because of my love for Christ. It was important to me that my children and grandchildren serve the Lord with the same enthusiasm and adoration! I tried my best to be an example for all of them –and the members of the church that my husband and I led.

Even though times have changed, I still believe in giving God your best with your dress. I often tell young Christian women going to church [and wearing short dresses and skirts] to, “Tell your shoes to give a party and invite your dress down!” 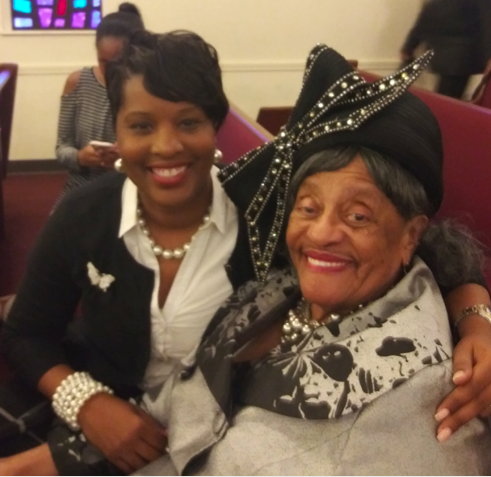