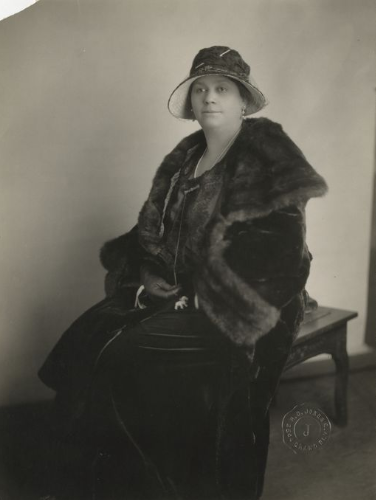 Lethia Cousins Fleming was many things throughout her life; campaign organizer, women’s and civil rights activist,wife, and politician, to name a few. Although Mrs. Fleming was most well known for her work in politics, both locally and nationally, she was also a twenty-year employee of the Cuyahoga County Child Welfare Board where she worked following an unsuccessful bid for her husband’s city council seat in 1929.

Born in Tazewell, Virginia in 1876 to James Archibald and Fannie Taylor Cousins, Mrs. Fleming was educated in Ironton, Ohio and later at Morristown College in Tennessee. Following college, she returned to her home state where she was a suffragist and taught for twenty years, until her marriage to Thomas Wallace Fleming in 1912.

After their marriage, the couple moved to Cleveland, where Thomas, a lawyer, would later become the city’s first African-American councilman. Only two years after the move, Mrs. Fleming became the chairwoman of the Board of Lady Managers at the Cleveland Home for Aged Colored People (later the Eliza Bryant Center) and was also part of many national organizations. She was a charter member of the Urban League of Greater Cleveland, the Traveler’s Aid Society, and the National Association for the Advancement of Colored People (Cleveland Branch). An ardent supporter of the Phillis Wheatley Association (PWA), her fundraising efforts led to the purchase of the first PWA building.