The Pier was one of the five original structures constructed at Euclid Beach Park for the inaugural season in 1895. It served a number of ever changing functions over the years and was always a great place for a leisurely stroll to sightsee back along the coast line or out onto Lake Erie. In the beginning, the Pier was divided down the middle by a high partition.  It had a totally utilitarian purpose in the early years of the Park’s existence serving as the embarking and debarking point for two steamers owned by the Park, the Duluth and Superior, that transported patrons to and from downtown Cleveland to Euclid Beach. 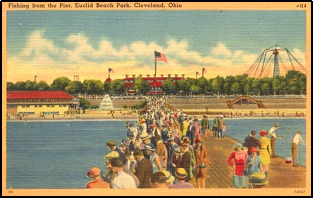 There are many postcard images of Park visitors renting boats next to it, diving into the lake for a swim, or casting a line into the lake and fishing. My fondest memory of the Pier is the fireworks displays at the lake end of it. Purpose and function were not the only things that changed over the years. Cleveland’s harsh winters coupled with Lake Erie’s relentless pounding of the Pier’s wooden pylons and deck resulted in damage year after year. The Pier was almost always the largest yearly maintenance expense on the Humphreys’ balance sheet. There are reports that the Pier originally extended out onto the lake almost 800 feet. A credible source documents the length at 650 feet in 1914. The length actually varied over the years depending upon how profitable the previous season was and how much the Humphreys’ could afford for its yearly repairs. 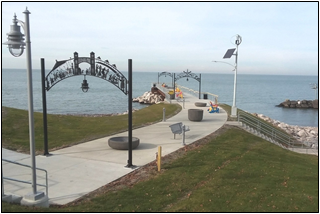 The Cleveland Metroparks recently completed the construction of a new Pier at Euclid Beach. Early on in the project, the Metroparks reached out to Euclid Beach Park Now and the group was involved with the design from the onset. I have acted as the liaison between EBPN’s board and the Metroparks team. The concrete portion of the original Pier had stood throughout the years since the Park’s closure as a silent reminder of the amusement park’s rich history. Unfortunately, it was not structurally sound and had to be demolished. A decision was made to relocate the new Pier slightly west of the original location which not only improved the panoramic view of Cleveland’s skyline but also enabled the new structure to span Lake Erie’s open water sooner. The new Pier is 16 to 20 feet wide and 315 feet in length.

The highlight for Euclid Beach Park fans is the three dramatic metal archways that span its width. Designed by local artist, Brinsley Tyrrell, they feature iconic images of the Park that include the Dance Pavilion, pool and slide next to the Bathhouse, Carousel, Rocket Ships and Laughing Sal. EBPN collaborated with the Metroparks on the choices for the subject matter. The Pier is the first phase of enhancements planned for the property.