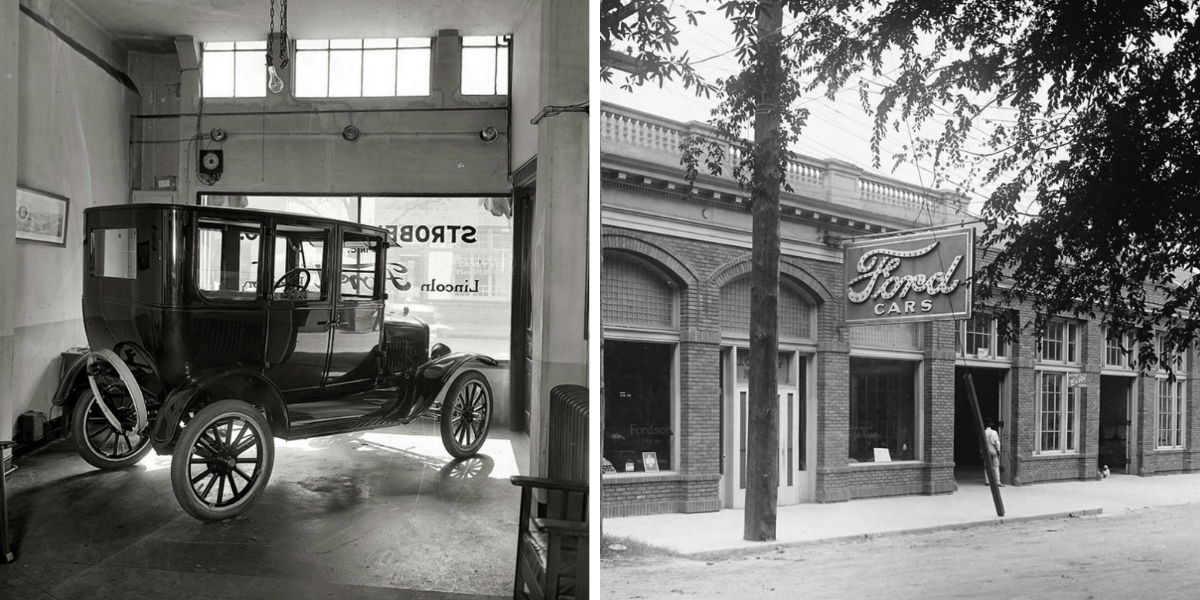 What better way to usher in the coming year than with the purchase of a brand new car? Hypothetically, let’s say you are shopping for a new Ford for example. Now, to have some fun, let’s say you were shopping for a new Ford exactly 100 years ago. What would be on offer, and what would the experience for today’s consumer be like? Let’s listen in on the conversation… ‘C’= Customer, and ‘D’=Dealer.

‘D’: ‘Sure do Miss, fresh off the assembly line in Detroit. We’ve got whatever you need; a Sedan, a Coupe, a Roadster Pickup, a Runabout, and a top-of-the-line Touring, all courtesy of Mr. Henry Ford.’

‘D’: ‘Sure are Miss; reliable as the sunrise, comfortable and affordable too! Why, just since 1908, we’ve sold five million of ‘em. All those customers can’t be wrong!’

‘C’: ‘That little convertible looks very nice over there.’

‘D’: ‘Yep, that’d be the Runabout, a two-seater that has plenty of pep, and even has electric headlights! I hope you’re a pretty good driver, as this little beauty can hit 45 miles per hour, and keep at it all day long!’

‘C’: ‘I think I can manage. The black paint is certainly very shiny, but does it come in any other colors?’

‘D’: ‘Nope! Word is that Mr. Ford got a good deal on a volume purchase of black paint!’

At this point in history, most car buyers appreciated value and affordability, regardless of available body colors. In 1921, nearly 57% of the automobiles sold worldwide were Ford Model T’s! Ford was a genius at integrated assembly as well. Outside parts suppliers were required to use a certain type of wood for the part’s shipping crates. The wood was recycled into building the wooden framework for the car’s bodies, and the leftovers were turned into charcoal briquettes, marketed under the trade name ‘Kingsford’.

‘C’: ‘Well, I guess I’m still interested in the Runabout. What sort of money are we talking about?’

‘D’: ‘Including the electric starter option, which I highly recommend for a young lady like yourself, we are looking at right around $400.00 out the door. Since West Virginia is still the only state in the union with sales tax, you won’t have to worry about that.’

Henry Ford was dead set against buying a car on credit, which he referred to as ‘morally reprehensible’. Instead, Ford dealers could act almost like a savings bank, accepting regular deposits from customers until they could pay for the vehicle entirely. General Motors, forming their own financial branch for consumer loans, began to chip away at Ford’s near-monopoly of the car market, until Ford was forced to follow suit.

‘D’: ‘Well Miss, it’s been a pleasure! I think you’ll really enjoy your new Ford, and look pretty snazzy behind the wheel! Remember, she’ll run on gasoline, kerosene, or methanol, so you’ll never get stuck on empty!’

The Model T was one of the first true ‘Flex Fuel’ vehicles in America, a real advantage since many were put to use in rural environments, where gas stations were few and far between.

Let’s return to our own time, back to the spacious, modern Ford dealership, where our purchase is being concluded.

‘D’: ‘Thank you and congratulations Ms. Smith for the purchase of your new Ford SUV. I’m sure you’ll love it!’

‘C’: ‘Of course. By the way, I’m interested in one of those factory roof racks. How much extra would that be?’

Today, we are living in something of a new ‘Golden Age’ of automobile production, from 300 mph hyper-cars to a mind-boggling array of sport utility vehicles, available to consumers across the financial spectrum. In the early 1920’s, Cleveland’s car buyers were also afforded a wealth of choices from domestic and foreign automakers. Around fifty American automobile companies (down from 253 in 1908) provided everything from utility to pure luxury vehicles. Detroit had surpassed Cleveland as the epicenter of automobile manufacturing, but names like Jordan, Cleveland, Peerless, Chandler, and Winton kept the flame alive in the Western Reserve.