As civil unrest continues to spread across our country, and worldwide, we can take this time to look back at Cleveland’s history when black activism affected change through peaceful protests and boycotts. 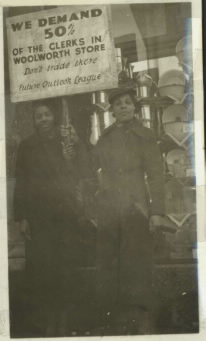 The FOL used economic boycotts and picketing to get African Americans hired at places they shopped and conducted business at; but were unable to get employment at because of their race. Attempting to fight racial discrimination in employment, the organization’s  slogan was “Don’t buy where you can’t work.” Through protesting and boycotting by not spending money at places that did not hire blacks, in Cleveland the FOL helped to integrate staffing of the Cleveland Transit System, Ohio Bell, and May Company.

During its peak, the FOL had more than 27,000 members, attracting both skilled and unskilled workers. The organization was mainly supported by weekly fees paid by those who secured employment through the efforts of the organization. . They also helped to organize working-class black people through labor unions, and began to challenge discriminatory practices through the court system.

If you wish to learn more about the Future Outlook League and Cleveland’s social justice history our archive collection consists of records pertaining to the establishment of the FOL and its activities in promoting employment and civil rights on behalf of Cleveland’s black community.