The groundbreaking ceremony for the construction of the Carousel Pavilion took place on the lawn in front of the Cleveland History Center at the corner of East Boulevard and East 108th Street on Tuesday April 17, 2012.  Just ten short years ago, the appearance of the Cleveland History Center was transformed forever as the construction of the Pavilion to house the iconic Euclid Beach Park Grand Carousel began. 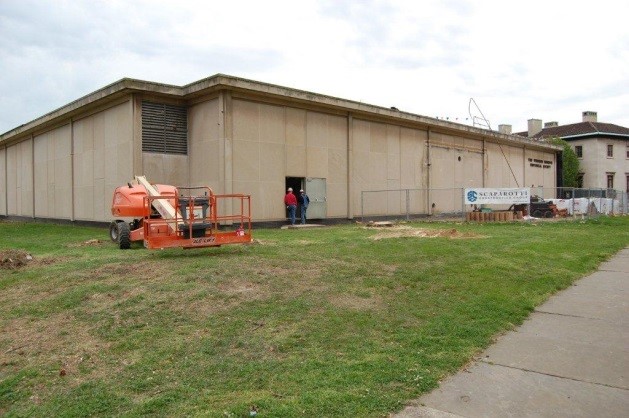 It was a long journey for the Carousel to that pivotal day.  When the laughter and good times that became synonymous with a visit to Euclid Beach came to an end on September 28, 1969, the business of demolition and ride disposal became the focus.  A number of the rides including the Colonnade’s many “kiddie” rides, the Flying Scooters, Dodgem, Sleepy Hollow Train, and Rotor would again operate under Humphrey management at Shady Lake Park in Streetsboro.  The reprise was short lived with the park operating a few short years from 1978 to 1982.  The Thriller, Racing Coaster, Flying Turns, Over the Falls, Laff in the Dark, and Surprise House would all fall victim to the wrecking ball.  The Grand Carousel along with a number of other rides was sold.  The Carousel was purchased by a ride broker and re-sold almost immediately to a small sea side amusement park outside of Portland, Maine called Palace Playland.  By the summer of 1970, the Carousel was operating again at its new home.  It operated there until 1996, when financial difficulties forced its sale.  Through a community based effort, the auctioneer was persuaded to conduct the auction in Cleveland.  On July 19, 1997, the winning bid by the Trust for Public Land brought the Carousel “full circle” back to its home on the shore of Lake Erie.  Over the next fifteen years a number of locations were suggested, Public Square, East Ninth street pier, Shaker Square, and even the State Park where it was originally located.  For a number of reasons, each site lacked the support to move forward.

In 2010, a group of community members who understood the impact the restoration and return to operation of this beloved symbol of what was arguably Cleveland’s most famous amusement park would have to the region, founded Cleveland’s Euclid Beach Park Carousel Society.  The April 17th ground breaking was a direct result of the successful collaboration of the Carousel Society with the Western Reserve Historical Society and Euclid Beach Park Now (a community organization formed in 1989 to honor and preserve the memory of Euclid Beach Park). The Carousel Society and Euclid Beach Park Now proposed the partnership with WRHS after determining University Circle was the best location for the Carousel.  At the time of the ground breaking ceremony, former WRHS President & CEO Dr. Gainor B. Davis was quoted as saying: “The timing is perfect and exciting,”  “We refer to the current renovations at the Cleveland History Center as a “transformation,” because it will completely transform the look, feel and amenities of the facility.  Add to that project a glass jewel box housing a carousel on our corner to entice visitors inside, takes the Cleveland History Center even one step further in being a family-friendly destination in Northeast Ohio.”