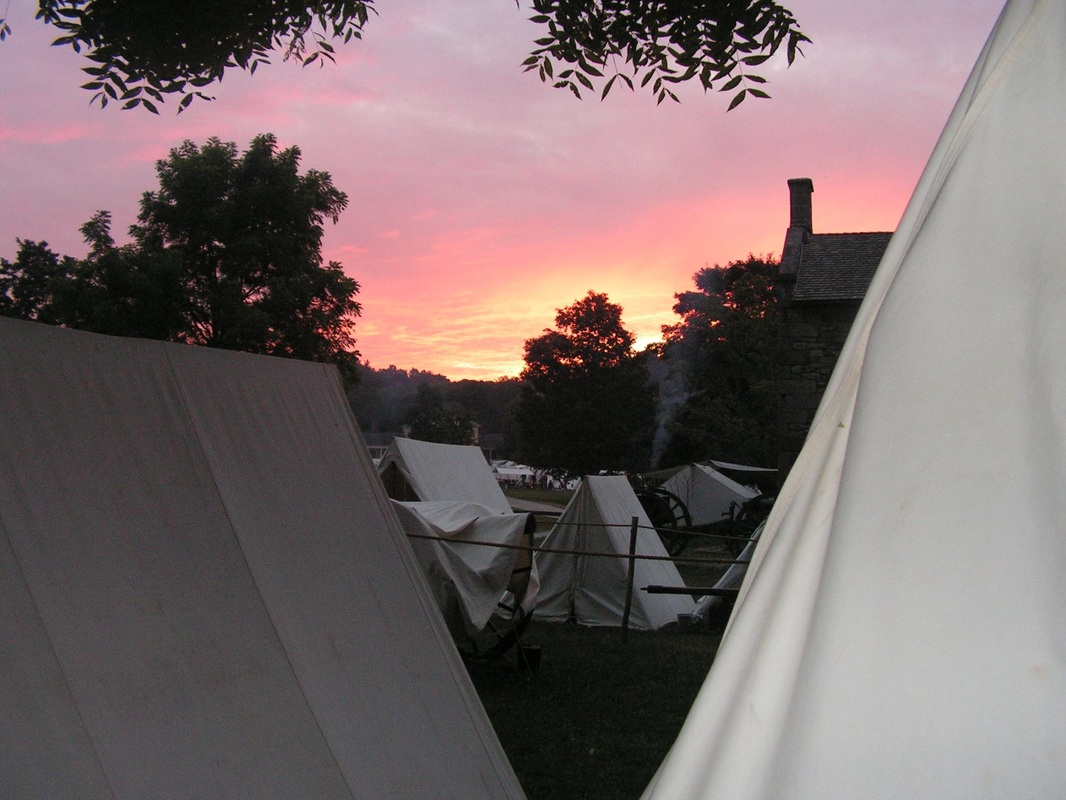 When hundreds of Civil War reenactors come to Hale Farm & Village on Aug. 13, they will again bring their uniforms, equipment, horses, and military protocol to recreate America’s defining historical period.

The reenactment weekend will be just as meaningful for them as it will be for spectators, as they get to experience a taste of what Civil War soldiers endured.

Akron resident Chris Smith, who has reenacted Civil War battles for the past 27 years, most of them at Hale Farm, likes to use the term “magic moments” to describe scenes that happen unexpectedly during a battle reenactment weekend.

When Chris and his fellow reenactors visit Hale Farm, they camp out overnight on Saturday and use the same amenities that were available to Civil War soldiers, such as cooking breakfast and brewing coffee over a campfire. Every detail, including the tents they sleep in, are made to look as real as the resources Civil War soldiers used in their day. “For me one of the greatest moments of any reenactment is at sunrise, when it’s damp or foggy,” Chris said. “(The scenery) looks like a painting.”

And unlike a virtual game on Xbox, these magic moments take your breath away, according to Chris.

One year at a Hale Farm reenactment, five wild turkeys strode past the camping soldiers early in the morning toward the woods, as if they expected the reenactors to be there, Chris said.

Bob Minton, who will serve as the overall federal commander at the upcoming Civil War reenactment, had a magic moment at Hale Farm last year when the armies recreated the surrender at Appomattox Court House, Va. Bob said it was one of the few times in his 24-year Civil War reenacting career that he couldn’t help but get all emotional.

Get ready for the Battle of Big Bethel

This year’s event will involve recreating the Battle of Big Bethel, an early skirmish in the Civil War that took place near Newport News, Virginia on June 10, 1861.

Big Bethel pitted 3,500 Union troops against 1,400 Confederate troops, and its significance lies in the fact it showed Federal authorities that the Confederacy was able to carry on a determined military struggle for independence.

Hale Farm & Village has become the largest annual Civil War reenactment event in Ohio, hosting 500 to 800 reenactors, 6 to 8 cannons, and 35 to 50 cavalry, according to Bob. Many of these dedicated reenactors come from other states.

In addition to the guys who are going to battle, Camp Chase Fifes and Drums Corps. will return to Hale Farm to play over 60 historical tunes, including “Yankee Doodle Dandy,” and “Downfall of Paris.” A hobby with commitment, friendship

Why do these guys keep coming back, not only to Hale Farm, but other national Civil War events? The heat of summer doesn’t stop them from donning the uniforms and putting on as authentic of a demonstration as possible.

For Bob, Chris, and Mike Church, who rides in the Sixth Ohio Cavalry, Civil War reenacting brings awe and memorable interaction with the crowds.

“Talking to the crowd never gets boring,” not even 30 years later, Mike said. He’s been participating in reenactments since he was 17 and learned to ride a horse specifically for these events.

Bob agreed with Mike that reenacting never gets boring and noted that all the battalions are always recruiting new reenactors. Men who are interested in becoming reenactors can ask any of the soldiers at Hale Farm’s Civil War reenactment about it, and they’ll gladly tell them where to find the nearest unit for meetings and mentoring.

The units meet in the winter and spring to decide on their reenacting venues for the year, then practice drills in the spring, as well as the mornings of battle events, Bob said.

Besides educating kids on Civil War-era weaponry, cavalry, strategies, and cooking, the reenactors have taken their passion for history and turned it into lifelong friendships

Mike noted that if he stopped doing Civil War reenacting, he probably would never see all the men he’s become friends with over the years. He and his wife feel a special kinship to the other reenactors, and they all have driven up to eight hours to attend birthdays, weddings, and funerals.

“It’s like close family,” Mike said. “There are no socioeconomic barriers. There are small-time millionaires, minimum wage earners, and everything in between serving side by side in the same unit. We’re just one big family.”