The Euclid Beach Park Company was incorporated on October 23, 1894, by John Flynn, John Irwin, Albert E. Thompson, Jerome B. Burrows, and Hylas B. Gladwish. Their business prospectus stated: “The lncorporators are convinced that a Summer Resort within easy reach of Cleveland properly appointed and conducted, will be both popular and profitable.” It goes on to state that estimates of admissions for a day’s outing in Cleveland proper and the surrounding communities were made. The estimated total spent by patrons annually was $455,000.00. The owners reasoned that a park like Euclid Beach, with its great lakeside location and superior amenities would garner a large share of that total.

When Euclid Beach first opened to the public on June 22, 1895, approximately 30 amusement parks were operating in Ohio, with even more opening after the Park’s inaugural year. Keeping in mind how much more difficult travel was 125 years ago, the vast majority of these parks posed no direct competition, but it is surprising to see how many amusement parks dotted Ohio’s landscape so early in the development of the amusement park industry. What makes the list even more impressive is that it does not include a large number of picnic groves/resorts that were also in operation.

Euclid Beach’s life span of 74 years pales in comparison to a number of other parks in the Cleveland area.  Chippewa Lake in Medina opened in 1878 and operated until 1978 hanging on to celebrate the park’s bittersweet centennial year.

Geauga Lake in Aurora also got an earlier start than Euclid Beach.  Opening in 1888, Clevelander’s enjoyed the thrills of its many rides and attractions until 2007.  One of the notable differences between Euclid Beach and Geauga Lake had to do with management.  Euclid Beach was owned and operated by the Humphrey Family 69 of its 74 operational years and the family’s management style did not change very much over the years.  A trip to Euclid Beach was like visiting an old friend.  There might be some new rides or attractions, but the park had a familiar “feel”.   Geauga Lake was owned by a number of groups during its lifetime.  Differing management styles resulted in changes that made the experience of visiting the park quite different over the years.

Idora Park, which operated in Youngstown, had a life span similar to Euclid Beach, operating from 1899 to 1984.  Puritas Springs Park located on Cleveland’s west side operated a few years fewer than the Beach.  The fun times and thrill of the Cyclone delighted park goers for 60 years until its closure in 1958.

Of all the amusement parks that operated during Euclid Beach’s lifetime, Luna Park located at East 110 Street and Woodland Avenue provided the stiffest competition to the Beach.  Glitz and glamour was the keynote for all of the rides and attractions.  Luna was more of an “adult” place for Clevelander’s to enjoy with risqué side shows and alcohol available for sale.  The park opened with much fanfare in 1905 and closed its doors in 1929 the victim of the economic hard times. Euclid Beach struggled during this period of time, but was in a better position to survive because it was not impacted by Prohibition and the loss alcohol sales.

Other parks came and went so quickly that they are mere footnotes in history.  White City was located a mere one mile east of Euclid Beach on Lake Shore Boulevard.  The two parks even shared the same street car line.  Unlike Euclid Beach with its free gate, White City charged an admission fee.  The park opened in 1902 and a short five years later closed its doors forever in 1927 due to a devastating fire.

Only two amusement parks that opened their doors in the Cleveland area are still operating today.  The first season at Cedar point was in 1870.  It opened twenty five years before Euclid Beach.   Unlike all of its contemporaries, it has not only survived but thrived over the years.  A small part of Euclid Beach lives on among the myriad of roller coasters that operate there.  It is not a”high ride” but an attraction some have described as a “carousel on steroids”.  Derby Downs (formerly The Great American Racing Derby at Euclid Beach) is a classic carousel that riders can race four abreast on hand carved wooden horses.

What is often referred to as a hidden gem here in Cleveland is the Memphis Kiddie Park.  Stuart Wintner opened the five acre park in 1852 on Memphis Avenue in Brooklyn on Cleveland’s west side.  He never envisioned Memphis Kiddie Park as being in direct competition with the other much larger amusement parks in the area, but felt a children’s park would be successful.   His vision was correct.  Over the years the little park has not only survived but thrived delighting generations of Clevelanders. Like Euclid Beach there has never been a charge for admission or parking.

There is not just one reason to the question for the closure of all of these amusement parks.  The answer is multifaceted with fire, storm damage, competition, Great Depression, World Wars, Prohibition, and changing social times all playing a role. 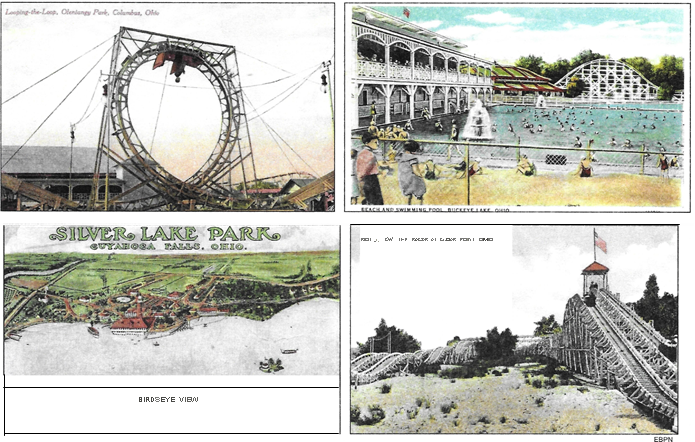