(Above Image: Belle Sherwin on the cover of Cleveland Women magazine, 1918. WRHS Library)

The League of Women Voters of Greater Cleveland (formerly known as the Cleveland LWV) turns 100 years old on May 29, but we didn’t know that until very recently.  For many years, the Cleveland LWV claimed that it was formed in April 1920, and we had no reason to question the timeline.  Nationally and locally, the League of Women Voters was created out of woman suffrage organizations, and in 1949, Virginia Clark Abbott wrote the history of woman suffrage in Cuyahoga County and of the Cleveland LWV up to 1945 relying on the memories of surviving women who participated in the suffrage fight and became leaders in the early League. Abbott wrote that the Woman Suffrage Party of Cleveland disbanded and launched the Cleveland LWV at a meeting at Cleveland’s Hollenden Hotel in April 1920. Abbott had the founding story mostly right, but the date was wrong.

What a celebration it was. On May 28,1920, at least 2,000 Cleveland women attended the Fifth Annual Convention of the Cleveland Woman’s Suffrage Party at the Duchess Theater on Euclid Avenue near E. 55th St. to celebrate their history with a pageant.  On May 29th the convention resumed at the Hollenden Hotel to formally disband the Cleveland Suffrage Party and reincorporate as the Cleveland League of Women Voters. The Cleveland LWV announced its purpose as: “… to foster the education of women in citizenship, to give them unbiased information upon the vital issues of the day, to support improved legislation and to secure law enforcement. The league as an organization shall support no political party, but shall urge women to enroll as voters.” Today, the League of Women Voters of Greater Cleveland empowers voters and defends democracy throughout Cuyahoga County, with more than 550 members, men and women, in eleven chapters. For more information go to www.lwvgreatercleveland.org .

The LWV of Greater Cleveland is partnering with the Western Reserve Historical Society to celebrate the 100th anniversary of woman suffrage and the founding of the Cleveland LWV with the upcoming exhibit: Women and Politics. The exhibit was scheduled to open on May 22 but has been delayed by the coronavirus pandemic.  Ironically, the 1918-1919 influenza pandemic also disrupted suffragists’ organizing activities as they worked to pass the woman suffrage constitutional amendment.  The amendment was passed by both houses of Congress in June 1919 and sent to the states.  It was ratified and became law on August 26, 1920.

In April 2020, WRHS staff contacted LWVGC asking the exact date that the Cleveland League formed in order to post a commemorating article.  We checked our sources and realized we had no records that showed an exact date. We had donated our earlier files to WRHS in the 1970s, and there were very few records from the first decades of the Cleveland LWV. Apparently, the early LWV activists were too busy changing the world to keep good records. The WRHS staff member checked the Plain Dealer and found the original report of the League’s formation celebration on May 29 1920. 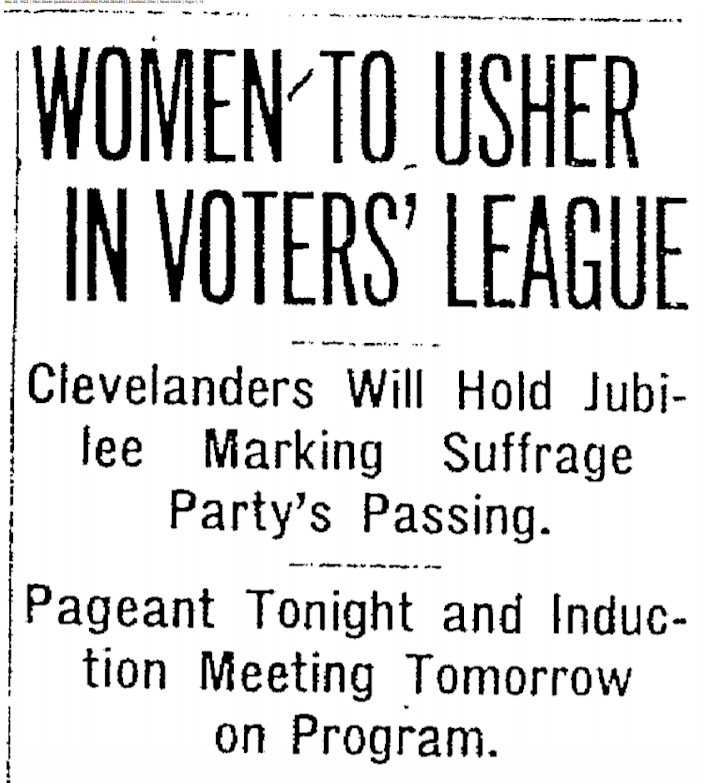 There is a moral to this story for all history lovers.  Too often, a fact gets recorded in a respected source and is repeatedly cited as authoritative. No one ever goes back to check the original documents, but the generally accepted “fact” is not true. In this case, after 70 years of perpetuating a mistake, the record has been corrected.