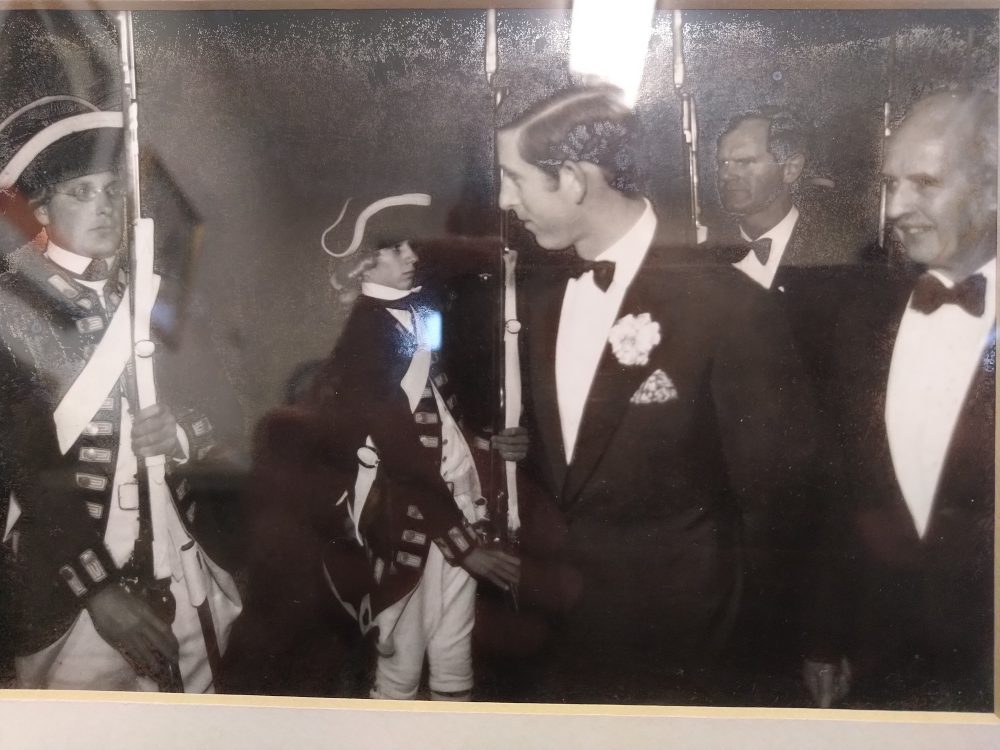 This photo was taken on October 20, 1977 when Prince Charles came to Cleveland.   The picture shows him coming to the front door of the Crawford where he would attend a dinner.   After dinner he attended a concert at Severance Hall.
My wife Diane and I were engaged to be married at that time and we came to see Prince Charles enter the Crawford and later we went to the concert at Severance which he attended and which, if I recall correctly, was conducted by Sir Michael Tilson Thomas.  Our companion during the evening was Anthony Phelps — Tony was British and an expert on heraldry and worked in the WRHS library.  Tony was a dear friend and groomsman at our wedding the following May.
The picture was given to me afterwards and for many years, hung on the wall of my office in the library.
Here’s a synopsis of the entire visit:

The 28-year-old Prince Charles, heir to the British throne and the future King Charles III, and Princess Margaret, sister of Queen Elizabeth II, spent a full day touring Cleveland as a guest of E. Mandell de Windt, Chairman of Eaton Corporation. They stayed the night at Eaton House, 282 Corning Drive, on October 20, 1977. The stay incurred a high level of security, including boats on Lake Erie.

The eldest son of Queen Elizabeth II arrived at Burke Lakefront Airport at 10:30 a.m. He then visited the Republic Steel Corporation district plant and the Cleveland Clinic. President Walter B. Waetjen and the trustees of Cleveland State University gave a luncheon for the Prince. Following the luncheon, the prince participated in the dedication of the university’s new Cleveland Marshall Law Building at Euclid Avenue and East 18th Street.

A group of major northeastern Ohio industrialists with interests in the United Kingdom hosted a dinner for the prince at the Frederick C. Crawford Auto-Aviation Museum of the Western Reserve Historical Society. Following dinner, the prince attended a Cleveland Orchestra concert at Severance Hall with a reception following. The prince departed Cleveland from Burke Lakefront airport the next morning at 8:45 a.m.