Frida Kahlo (1907-1954) and Elizabeth Catlett (1915-2012), two women who won worldwide acclaim for their art, created evocative works that reflected their personal struggles and triumphs as well as those of farmers and other workers in Mexico and the United States of America. For anyone who will take the time to look, learn, and teach, their works have much to offer in the way of arts and humanities education.  Thought provoking lessons on Kahlo and Catlett are as close as the Cleveland Museum of Art (CMA) and the Cleveland Public Library (CPL), where reference and/or circulating collections and programming activities reflect their contributions to world history and culture.

Kahlo, a native of Mexico and an alumna of the National Preparatory School in Mexico City, was a master of the self-portrait.  Her willingness to visibly embrace Mexican culture—as reflected in her frequent choices to wear indigenous jewelry and clothing styles from different parts of the country, her radical politics and ongoing challenges to the systemic oppression of poor people, and her refusal to accept restrictive gender roles for women helped to make her a celebrated activist-artist in her own right and a creative comrade to her equally famous, controversial, and artistically-gifted husband, Mexican muralist Diego Rivera. 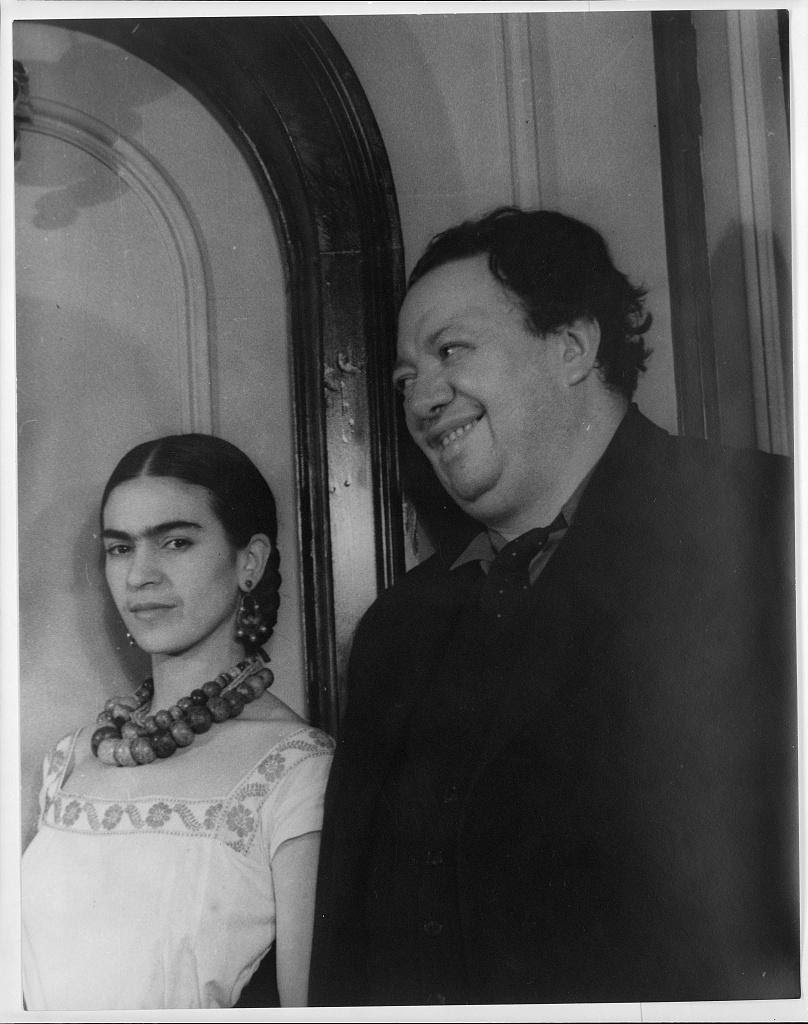 In Frida Kahlo at Home (2016), one of the many book-length studies of the artist’s life and work, author Suzanne Barbezat states that, despite their sometimes stormy relationship, Kahlo and Rivera “were each other’s best supporter and most ardent fan.  They shared political convictions, and perhaps most importantly, were both fiercely proud of being Mexican.” Although she endured major health challenges in both her childhood and adult years, Kahlo’s career also included teaching, international travel, and exhibitions in Mexico and other countries.

During the observance of CMA’s centenary, the museum offered guests the opportunity to view one of Kahlo’s signature works, “Fulang-Chang and I,” a loan from New York’s Museum of Modern Art.  This painting was also the subject of an online July/August 2016 Cleveland Art Magazine article. In addition to the books and other reference materials that are available in CMA’s Ingalls library, a special exhibition, A Graphic Revolution: Prints and Drawings in Latin America, which includes works by Rivera and others, will be on view through November 2020.

Like Kahlo and Rivera, Elizabeth Catlett also strove to create socially relevant art. An African American native of Washington, DC, she completed her undergraduate and graduate degrees at Howard University and the University of Iowa, respectively.  After teaching for several years at the secondary and post-secondary levels, she traveled to Mexico on a Julius Rosenwald Fund Fellowship in 1946.  She studied and created works of art with members of the Taller de Gráfica Popular, married Mexican artist and colleague Francisco Mora, became a Mexican citizen, and served as a Professor of Sculpture at the National School of Fine Arts, the National Autonomous University of Mexico.  In addition to their artistic work, Catlett and Mora raised three sons.

Catlett focused primarily on prints and sculptures, winning many commissions and awards and exhibiting widely.  In Elizabeth Catlett: An American Artist in Mexico (2000), Melanie Anne Herzog quotes Catlett’s 1983 self-description of her life and work:

I am black, a woman, a sculptor, and a printmaker.  I am also married, the mother of three sons, and the grandmother of five little girls [now seven girls and one boy] . . . . [I] was born in the United States and have lived in Mexico since 1946.  I believe that all of these states of being have influenced my work and made it what you see today.

Indeed, the influences of the aforementioned “states” were evident  works that were included in CMA’s fall 2002 exhibition, “Elizabeth Catlett: Prints and Sculptures.” Images of Catlett works that reflect these themes are available on the CMA website.