“In the same way that a threat can be just as destructive as an action, “nothing” can be the worst response of all.”

“Great men have done great things here and will again and we can make America what America must become.”

–James Baldwin, Writer
From “Letter to My Nephew”

“The nation must listen to what’s being said in the street and understand the impact of living year after year with the feeling of being hunted and unheard if we are to ever recover from the pandemic of racism.”

–The Reverend Dr. William J. Barber II
President and Senior Lecturer of Repairers of the Breach
Co-Chair of the Poor People’s Campaign: A National Call For Moral Revival

“What’s past is prologue.” Playwright William Shakespeare suggested as much in The Tempest more than 400 years ago, just prior to the beginning of African servitude in what would become the United States of America.  In the first decade of the 20th century, during the era of Jim Crow segregation, philosopher George Santayana wrote in The Life of Reason, “Those who cannot remember the past are condemned to repeat it.”   While both authors are long dead and frequently misquoted, thought leaders throughout the global community are expressing similar sentiments in our time, as they struggle to explain the growing activism and public protests, both peaceful and violent, following the death of George Floyd, a black man, at the knee of Derek Chauvin, a white Minneapolis police officer.  Many historians–while refusing to accept fate and destiny as acceptable explanations for current events, will admit that one can learn valuable lessons by carefully studying the American past.

May 29, 2020, was the Friday after Mr. Floyd’s death on Memorial Day and the day before the first round of related peaceful protests and violent unrest in Greater Cleveland, Ohio.  It was also the date that I decided to invite members of the Facebook group for the African American Archives Auxiliary of the Western Reserve Historical Society to join me for the     June 1, 2020, launch of a new initiative, “Black Agency and Black Activism, around Cleveland and around the World.”  My goal was to raise awareness about this topic in recent history.

On June 1, 2020, I did, in fact, share a post on Facebook.  That post included a link to a New York Times article with the following headline:  “Two Crises Convulse a Nation: A Pandemic and Police Violence.”   As commentators began to compare the events of 2020 with those of the turbulent decade of the 1960s, I decided that the focus of my “Agency . . . Activism” posts for the first week in June would be the power of the written and spoken word, according to three black men with firsthand knowledge of the 1960s: James Baldwin, Robert P. Madison, and the Reverend Dr. William J. Barber II.  An essayist-novelist-playwright, an architect-author, and an activist-educator-pastor, respectively, the words of these men will, no doubt, continue to inspire readers and listeners for some time to come.  I offer the following essay as an open invitation to read, watch, and listen to complete works by and about these men, including the titles mentioned below. 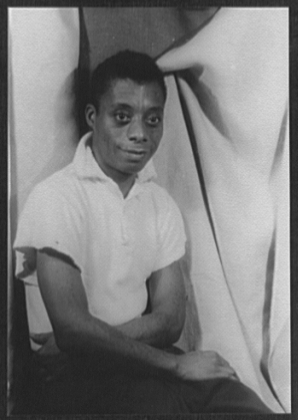 In his December 1, 1962, “A Letter to My Nephew,” James Baldwin—in anticipation of the January 1, 1963, centenary of the Emancipation Proclamation and the planned August 28, 1963 “March on Washington for Jobs and Freedom,” wrote to his teenaged namesake, who was coming of age in a racialized, poverty-stricken environment.  The letter said, in part:

This innocent country set you down in a ghetto in which, in fact, it intended that you should perish. Let me spell out precisely what I mean by that for the heart of the matter is here and the crux of my dispute with my country. You were born where you were born [in New York’s Harlem] and faced the future that you faced because you were black and for no other reason. The limits to your ambition were thus expected to be settled. You were born into a society which spelled out with brutal clarity and in as many ways as possible that you were a worthless human being. You were not expected to aspire to excellence. You were expected to make peace with mediocrity.

Baldwin, an openly gay integrationist who never shied away from controversy, went on to suggest that there was nothing wrong with being black and no reason for his nephew to try to be like white men. Instead, the younger James had to do the following:

[A]ccept them and accept them with love, for these innocent people have no other hope. They are in effect still trapped in a history which they do not understand and until they understand it, they cannot be released from it. They have had to believe for many years, and for innumerable reasons, that black men are inferior to white men.

You don’t be afraid. I said it was intended that you should perish, in the ghetto, perish by never being allowed to go beyond and behind the white man’s definition, by never being allowed to spell your proper name. You have, and many of us have, defeated this intention and by a terrible law, a terrible paradox, those innocents who believed that your imprisonment made them safe are losing their grasp of reality. But these men are your brothers, your lost younger brothers, and if the word “integration” means anything, this is what it means, that we with love shall force our brothers to see themselves as they are, to cease fleeing from reality and begin to change it, for this is your home, my friend. Do not be driven from it. Great men have done great things here and will again and we can make America what America must become.

Robert P. Madison is a native Clevelander and current resident of Shaker Heights, Ohio.  Like Baldwin, he  was born in the 1920s and struggled with Depression Era poverty. Madison shared some of his thoughts about what could and should be done in response to racism and racial unrest in his 2019 memoir Designing Victory. 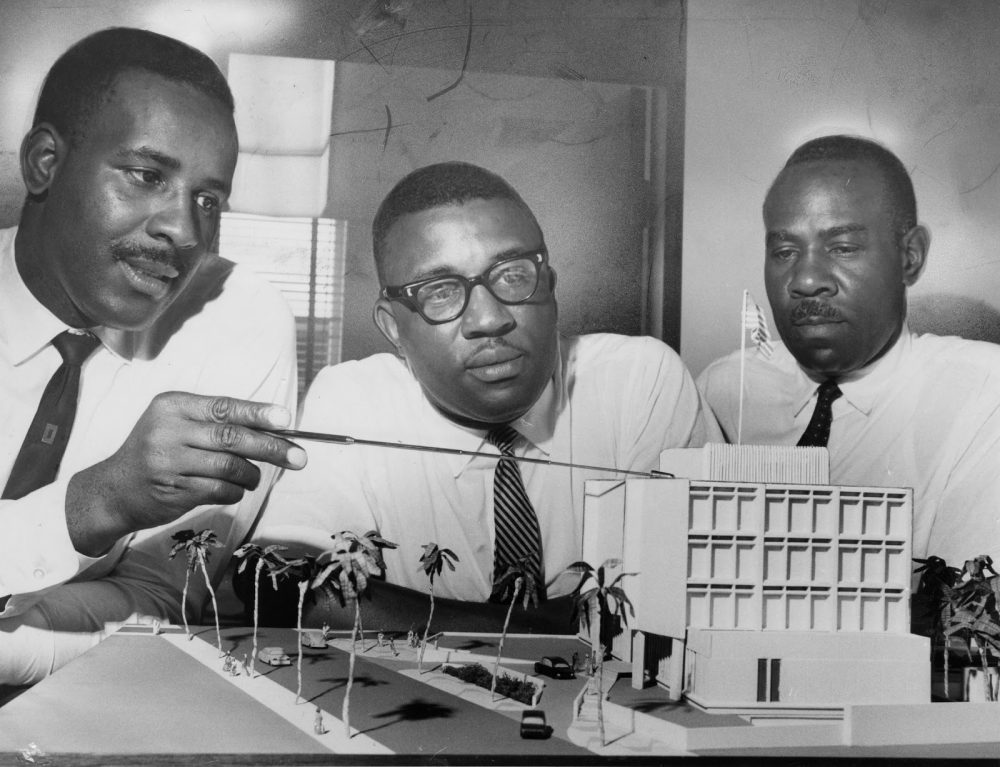 (left to right: Bernard, Julian, and Robert Madison pictured here looking over the model for one of their designs, the United States’ embassy building in Senegal, in 1966.)

An award-winning architect of international renown, he helped integrate Cleveland Heights, Ohio, through the purchase of land and by designing and building a new home on North Park Boulevard.  He and his family also joined the historically white St. Paul Episcopal Church in that community. In chapter 18 of his book, Madison explained that he “had high hopes for St. Paul and wanted that church to help [him] realize them, particularly given the tone of the times.”  His disappointment, however, is clearly expressed in the following passage:

One Sunday [in 1966], while Cleveland’s Hough neighborhood was still burning, I was particularly eager to hear the message the preacher would deliver.  Would he instruct us on our duty to help promote peace and civility?  Would he work to broaden and unite the community?

No.  Instead, he started talking about a sculpture of the hands of grace some British artist had given the church.  I sat there for an hour, waiting for him to say something about the Hough riots.  Even though the Rev. Dr. Martin Luther King Jr. had spoken from that very pulpit five years earlier, this preacher didn’t say a word about what was going on a few miles away.

So I wrote a letter to the bishop telling him that, while Hough was burning, the preacher was talking about some gift from England.

Nothing.  I never heard a word.  In the same way that a threat can be just as destructive as an action, “nothing” can be the worst response of all. To be true to myself, I knew I had to do something.  So I rescinded my membership in St. Paul’s to return to my old church, St. John A.M.E.  I wasn’t bitter, just disappointed that lasting change takes so long.

In the current season of protests and riots, many religious leaders are refusing to remain silent, including the Reverend Dr. William J. Barber II.  Born just two days after the 1963 “March on Washington for Jobs and Freedom,” Rev. Barber has for many years preached, protested on behalf of, and taught about the need for radical change in public and social policy in America, especially as it relates to the lives of poor and low-wealth people. As the Co-Chair of the 2020 Poor People’s Campaign: A National Call For Moral Revival, Rev. Barber is viewed by many as being the heir to the unfinished business of the Civil Rights Movement, since the Reverend Dr. Martin Luther King, Jr. was assassinated months before the 1968 Poor People’s Campaign and March on Washington.  In response to the George Floyd protests and coincident unrest during the ongoing COVID-19 pandemic, Rev. Barber stated:

The nation must listen to what’s being said in the street and understand the impact of living year after year with the feeling of being hunted and unheard if we are to ever recover from the pandemic of racism.

On Monday, June 1, 2020, the Western Reserve Historical Society reaffirmed its partnership “with the African American Archives Auxiliary (AAAA), established fifty years ago to support the African American Archives during a time of intense and important social unrest in Cleveland and the nation.”  This ongoing partnership now includes “In Their Voices: Documenting the African American Experience in Cleveland, An Initiative to Promote Listening, Learning, and Teaching.”  By supporting the collection of first person narratives and other primary documents related to the pandemics that millions of people are talking  about in 2020, it is our hope that secondary works about this period in our history will be enriched as a result of our efforts.

We are listening, and we hope that you will share your story with us.