After a friendship of twenty-five years, it is difficult to find all of the words to express what Margaret Barron meant to me. To me Margaret Barron was larger than life. She was a deep thinker with a keen intellect, and an all-around problem solver.

When I was appointed to the QUAD A board of trustees in 1994, Margaret had not yet been elected President of the Board, but she was 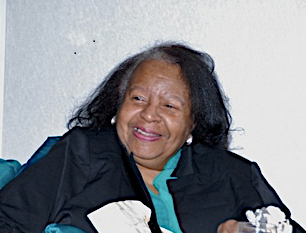 a go-getter who knew how to pull Board members together to complete required tasks.

Indeed, she played a big role and was one of the main inspirations behind the numerous programs QUAD A organized and implemented.

I still remember when she was sworn-in as President of the Trustee Board. It was a nice day with sunshine, and Margaret wore a beautiful corsage on her dress. Margaret hit the ground running. She, in fact, presided over some of the most important programs and celebrations launched by QUAD A, including the annual Martin Luther King, Jr. commemorative celebration; which featured some of the most iconic figures in Civil Rights history as keynote speakers.

When illness caused Margaret to curtail her activities, she eventually selected me to serve as Interim President of the Board. I was honored that that she had faith in my ability to fill that role; although no one could truly take Margaret’s place.

Over the years, Margaret made herself available to me as an advisor on any number of issues related to QUAD A; indeed, she was like a big sister to me. She had a good listening ear. She listened to me, encouraged me, and kept me uplifted.

Margaret served as President Emerita of QUAD A from 2009 until her passing. She was a gem to all of the members of QUAD A and the Western Reserve Historical Society in general. Margaret was loved and respected by many throughout the Greater Cleveland community—including her organization, National Coalition of 100 Black Women, Inc., of which she is the founding member of the Greater Cleveland Chapter.

Margaret and I failed to connect with each other during the last weeks of her life. We missed each other’s phone calls several times. Even though It’s sad that we didn’t catch up with each other, Margaret, nonetheless left 25 years of  leadership, service and memories to be cherished. I will hold fast to those precious memories. 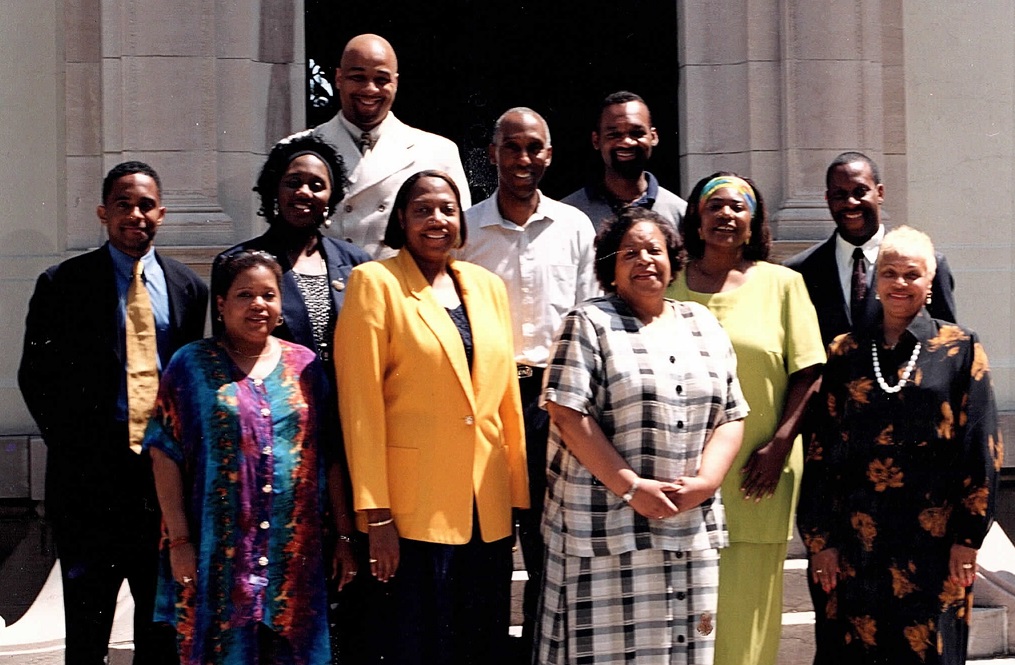 Western Reserve Historical Society is saddened by the passing of Margaret R. Barron. She was a long-standing member of WRHS and selflessly served many years as president of the African American Archives Auxiliary (AAAA or Quad A). Most recently, she was awarded the title “President Emerita” for AAAA.
President Barron held a bachelor’s degree from Cleveland State University and a graduate degree in Library Science from Case Western Reserve University. She served with distinction as a Librarian and Associate Professor at Cuyahoga Community College and was the chapter founder and chartering president of the Greater Cleveland Chapter of the Coalition of 100 Black Women.
Under the leadership of President Barron, AAAA has, among other things, presented excellent Rev. Dr. Martin Luther King, Jr. (MLK) Commemorative Celebrations and guest lectures that engaged inter-generational program planning committees and attracted diverse audiences.
President Barron often allowed other AAAA volunteers to take center stage. Beginning especially in the 2008, she delegated many of her presidential duties to other trustees, giving them new and expanded opportunities to lead and serve the auxiliary. While allowing others to play a more central role, she continued to support planning, programming, and outreach efforts by participating in the June 2015 “Afternoons in the Archives” membership meeting, the February 2020 planning meeting, and contributing a “Reflections on Leadership” article for the February 2020 program newsletter.
Even in the midst of the current COVID-19 global pandemic, she found time to participate in the virtual AAAA membership meetings, taking care to remind participants of the importance of their work. President Margaret R. Barron continued to represent servant leadership at its best.

She will be truly missed.

Nearly a century ago, a young man flew repeatedly across the length and breadth of North America with a lion cub in his cockpit for company. Largely a character of his own creation, ‘Colonel’ Roscoe Turner became a household name during a period when aviation was evolving as a viable method of international transportation, and the dashing pilots of the day became instant public heroes.

Unlike today, where celebrities are ‘famous for being famous’, the luminaries of the 1920’s and ‘30s actually were required to achieve something specific, especially the pilots, by extraordinary accomplishments and feats of daring. Altitude records, speed records, distance records, trans-oceanic flights; all were qualifiers for aviators willing to risk it all for a moment in the sun.

For World War I veteran Turner, his love of flying held the promise not only of notoriety, but a viable means of survival in an economically uncertain world. A master of self-promotion, Turner understood that an instantly recognizable persona was required to capture and hold the public’s attention, and he used his military-inspired uniform, diamond-studded pilot’s wings, waxed moustache, and lion mascot to great effect.

One of the West Coast’s largest oil refiners, the Gilmore Oil Company, became one of Roscoe’s early sponsors, and the aircraft he flew (and eventually raced) sported the company’s cream, red, and gold livery, while the brave little lion cub, who had his own custom parachute, was christened ‘Gilmore’.

A rapid way to achieve fame (and some fortune), was in the arena of air racing, with participation in popular events such as the Bendix Cup, Thompson Trophy, Schneider Cup, MacRobertson Trophy, and the Pulitzer Trophy. In North America, arguably the most prestigious venue was the National Air Races, held at the Cleveland Airport from 1929 onwards. During the week-long activities, hundreds of thousands of spectators from around the nation would gather to watch their heroes, like Roscoe Turner, defy death hurling their powerful racing planes around a ten mile course with fifty foot high pylons marking the turns. Some of the pilots did indeed perish pursuing victory, reminding all who participated that the stakes were incredibly high.

Turner, always striving for a competitive edge, struck a deal with Jimmy Weddell, a Louisiana racing plane manufacturer for one of his Weddell-Williams Model 44’s, a low-wing monoplane design powered by a Pratt and Whitney Hornet radial engine. The Model 44 was a proven design, having achieved a second place finish in the Thompson Trophy in 1931. Registered as NR61Y, Turner’s Model 44 appeared in Gilmore Oil colors for the 1932 Thompson, and eventually placed third, behind two other Model 44’s. 1933 saw Turner claim the top spot in the cross-country Bendix race, a first place in the Shell Oil Speed Dash, and a disappointing sixth in the Thompson after winning, then being disqualified. 1934 brought ultimate victory for NR61Y and Turner with an outright win in the Thompson Trophy, the climax of three years of hard work and innovation. The plane was repainted in the all-gold color scheme it wears today. The following year, Turner and the Model 44 took second in the Bendix Trophy, and by 1937 the aircraft was handed over to pilot Joe Mackey, as Turner was developing a new racer. NR61Y would continue to soldier on into 1939 where it continued to compete respectably in the Thompson.

Fast forward eighty years, when in 2019, the Hallmark Company produced a Christmas Ornament-sized replica of Turner’s Model 44, now registered as NX61Y, as it appeared in the late ‘30s. The miniature plane is part of the ‘Sky’s the Limit’ series of ornaments, and does a creditable job of depicting even the tiniest details of the original. It is fascinating that an aircraft that thrilled crowds so long ago remains in the public consciousness. The real Weddell-Williams Model 44, number NX61Y, is displayed prominently in the Crawford Auto-Aviation Museum, hanging from the ceiling in the attitude of banking around a racing pylon. She remains the only original Model 44 in existence, representing a page from the ‘Golden Age’ of air racing we’ll never see again.

New Western Reserve Historical Society Publication & Exhibition tells story of “the rag trade” and the immigrant entrepreneurs who left their mark on the region.

A new, illustrated history of the Cleveland Garment Industry tells the stories of the immigrant entrepreneurs and workers who made “the rag trade” part of the city’s economy. A Stitch In Time: The Cleveland Garment Industry, written by Associate Curator for Jewish History Sean Martin, Ph.D., and published by Western Reserve Historical Society, is now available.  A companion exhibition developed in collaboration with Barrie Projects will open at the Cleveland History Center in University Circle on November 6, 2015.

The garment industry, concentrated in the Warehouse District and along Superior between East 19th and East 25th Streets, left its mark on the city in many ways.  Throughout the 20th century, Cleveland was one of the nation’s leaders in the garment industry.  Small shops established in the 19th century by immigrant entrepreneurs grew to become leading manufacturers.  Companies based in Cleveland made dresses, blouses, sweaters, cloaks, and suits for men, women, and children. Successful manufacturers became prominent philanthropists, helping to turn Cleveland into the best location in the nation, and immigrant workers built lives as Americans.  Workers earned the money to get an education and start their families. The industry declined in the late 20th century, but its mark on the city remains.

The publication was made possible through generous funds from the Stone Rand Philanthropic Fund, Ruth G. and Sam H. Sampliner Fund, Adler Family Foundation, and the William & Barbara Klineman Philanthropic Fund. Martin explained the origins of the project, saying “A Stitch in Time was inspired by the efforts of Marc Frisch, whose family owned Frisch Knitting Mills, and Gary Rand, of Ohio Knitting Mills. Their desire to learn more about the industry their families were involved in motivated WRHS to tell the story of the industry and of companies such as Joseph & Feiss, Richman Brothers, Work Wear, Bobbie Brooks, and Dalton. Garment manufacturers helped immigrants find their way in a new country and contributed significantly to the growth of the city and region.”