“The American Negro must remake his past in order to make his future.”

“An analysis of Schomburg’s life should not establish his as the exclusive Afro-Latinx experience to the exclusion of other lived experiences, particularly when considering those of women who shared his racial and ethnic heritage.  Such an examination, however, is useful in attempting to understand the complexities of populations of African descent who arrive in the United States speaking the Spanish language, taking into consideration the specificities of historical context.”

As the observance of National Hispanic Heritage Month continues, and we prepare for the upcoming celebration of Cleveland Book Week (September 29 – October 4), this is the perfect season for readers to peruse works by and about Arturo Alfonso Schomburg (1874-1938).

Born in San Juan, Puerto Rico, Schomburg migrated to New York in 1891 and went on to become one of the most celebrated American bibliophiles and thought leaders of his day, continually championing the cause of Puerto Rican and Cuban independence from Spain –through the end of the Spanish-American War in 1898, and the scholarly study of Black people throughout the global community. His pioneering work as a book collector, archivist, and curator in the first half of the twentieth century helped lay the foundation for today’s Schomburg Center for Research in Black Culture in New York’s Harlem community.

One of Schomburg’s most famous essays, “The Negro Digs Up His Past,” appeared in a special 1925 issue of Survey Graphic Magazine, “Harlem, Mecca of the New Negro,” and a subsequent book on the same subject.  Dr. Alain Locke served as editor for both publications, which showcased works by the emerging and established artists and scholars associated with the Harlem Renaissance or the “New Negro Movement, “ including former Clevelander and Anisfield-Wolf Book Award winner Langston Hughes. 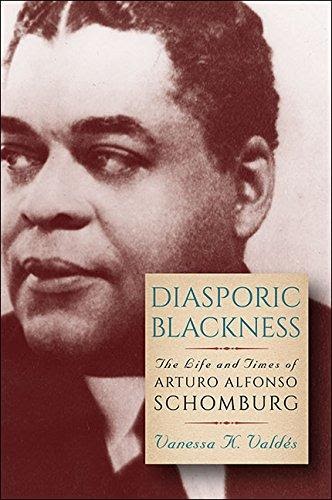 Throughout his life, in all of the circles in which he traveled, Schomburg remained Afro-Latino; that is, he actively thought of himself as such, as a black man born in Puerto Rico.  He actively laid claim to the richness of the histories and cultures of the Spanish-speaking world.  We see this in the books he collected, the articles he wrote, and the translations he provided from Spanish to English and vice versa.

For all of the aforementioned reasons and so many more, Dr. Valdés’s scholarly study offers readers an insightful overview of a well-lived and carefully documented life.