Two of the most remarkable women in Cleveland’s history happened to be related.   One was a pioneer in the early philanthropy of the city and the other helped put the city on the international musical map.

The story of their work begins when Rebecca Rouse and her husband Benjamin came to Cleveland.  Active in the Baptist church they both helped organize Sunday Schools in the Western Reserve and were among the founders of the First Baptist Church.   Rebecca’s work, however, expanded and she was among the organizers of the Martha Washington and Dorcas Society the city’s first relief organization in 1843.   It in turn, at Rebecca’s suggestion, it established the Cleveland Protestant Orphan Asylum (today’s Beech Brook) in 1852.  However, her organizational expertise was truly on display during the Civil War.

Five days after Abraham Lincoln’s first call for troops, Rebecca created the Ladies Aid Society, which would eventually become the Soldiers Aid Society and part of the U. S. Sanitary Commission.   Throughout the war the group worked to gather supplies (including blankets and books) for the soldiers; raised an immense amount of money ($78,000, which would be $1,611,257 today) for the Sanitary Commission by organizing the Northern Ohio Sanitary Fair in 1864, and then helped returning soldiers find jobs.   Her work in this area is memorialized by her depiction in one of the bronze panels inside Cleveland’s Soldiers’ & Sailors’ Monument. 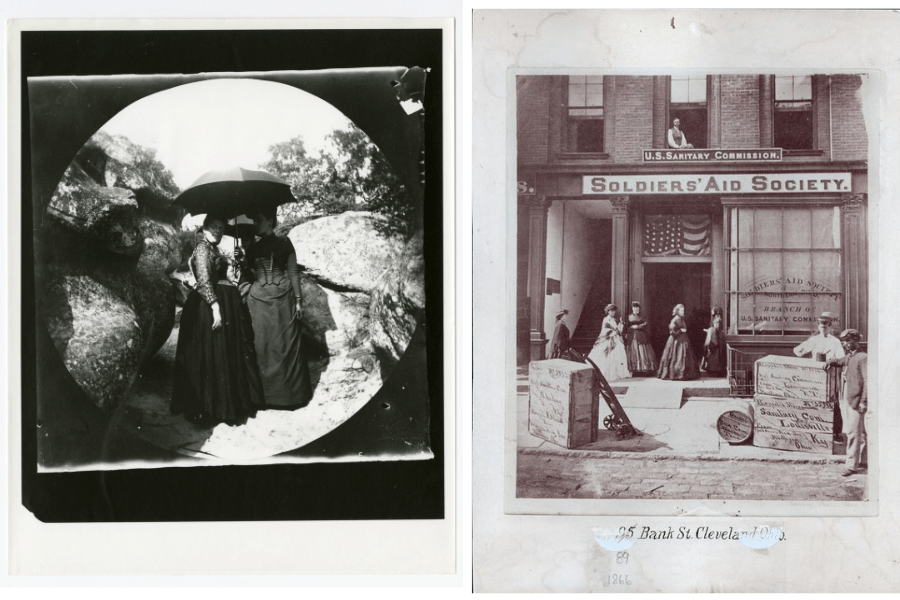 Rebecca died in 1887, but certainly she had the chance to see her granddaughter, Adella Prentiss (Hughes), who was born in 1869.    Adella attended Vassar College where she became immersed in playing and studying music.   When she graduated in 1890 she and her mother, Ellen Rouse Prentiss, toured Europe where she saw and heard some of the best orchestras in the world. That tour made her a better musician, but it also whetted her appetite to bring good music to her home town.   By the late 1890s she had become a concert manager and eventually became the city’s leading impresario.  But her main ambition was to provide a permanent orchestra for the city.    She did that by organizing the Musical Arts Association in 1915 and it, three years later, would create the Cleveland Orchestra.   Adella would manage the Orchestra from 1918 to 1933.   Her Cleveland musical resume also included assisting Almeda Adams in the establishment of the Cleveland Music School Settlement – today’s Music Settlement.

The story of these two remarkable women is well recorded in the Western Reserve Historical Society’s Library where the Rouse and Hughes papers are preserved as well as records of the Soldiers Aid Society and the Cleveland Music School Settlement.   Perhaps the most fascinating part of these collections are the images that Adella took with a Kodak #1 box camera of her trip abroad – they capture the world that helped shape the future of music in Cleveland.