The midway at Euclid Beach Park featured three noteworthy carousels on opening day in 1921. One hundred years ago, three new rides made their debut at Euclid Beach Park. All but one would still be operating on September 28, 1969 when the Park closed its gates forever.

The Great American Racing Derby took its place next to the Grand Carousel built by the Philadelphia Toboggan Company and across from the Flying Ponies which were a product of the Herschell-Spillman Company. While both the Derby and Grand Carousel had four rows of horses, the Derby required a much larger footprint. The Derby’s enclosure was 114 feet in diameter while the Carousel was housed in a 90 foot diameter structure. The Great American Racing Derby was a product of the Prior and Church Company of Venice, California. It was a very unique merry-go-round with 64 hand-carved wooden horses that ran four abreast and designed to hold two riders. Unlike a conventional carousel the horses not only went up and down but moved forward and backwards. Another similarity between the Grand Carousel and the Derby was the ability of rider’s to “win” a free ride. In the Grand Carousel’s early years of operation, riders could reach for a brass ring which would entitle them to a free ride. Likewise, riders on the Derby who found themselves in the lead of their row of horses when the bell rang at the end of the ride would also receive a free ride. The ride operator would place a small American Flag in a hole behind the horses left ear and the rider / riders would stay on their horse for the next turn of the Derby. The major difference between the two rides had to do with speed. The much faster speed of the Derby along with the horses’ up and down movement elevated this merry-go-round to a circular “thrill ride”. In 1967, the Derby fell victim to its high maintenance and the need for the Humphrey Company to raise operating capital amid dwindling attendance. It was sold to Cedar Point where it still operates as Cedar Downs. 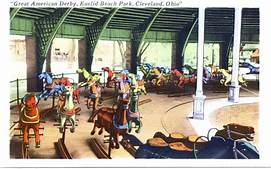 The two other rides that made their debut in 1921 were the Dodgem and the Mill Chute. Both of these rides were altered significantly during their lifespan at Euclid Beach. The Dodgem building was 143 feet by 90 feet and at the time of its installation was reportedly the largest Dodgem track in the country. The original cars were designed to operate in exactly the opposite direction the driver intended. If for example, the driver steered left the car would go right. With cars that operated in this fashion it was difficult for riders to heed the operator’s instruction of: “Traffic moves one way and one way only, no head-on bumping”. In the 1930’s after more than ten years of mayhem, the ride cars were replaced with cars purchased from the Dodgem Corporation headquartered in Lawrence, Massachusetts. Over the years, the cars acquired a number of different paint schemes, but remained in operation until the park closed.

The Mill Chute was designed and built by the Philadelphia Toboggan Company. Riders would board boats and leisurely head toward a darkened “mountain tunnel”. They would travel through a number of scenes painted with luminous paint before ascending the lift hill and plummeting into the “lake” below. As with the Dodgem, the boats on the Mill Chute were also replaced. The renovations went much farther with even the name of the ride changing to Over the Falls. In 1937, the channel was extended, more curves were added, the hill was raised from 30 to 37 feet and the angle was increased from 20 to 50 degrees. The results were a dramatic increase of speed from the top of the lift hill to the bottom. 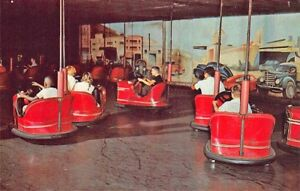 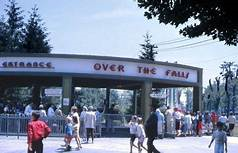